You can right-click & save NFTs 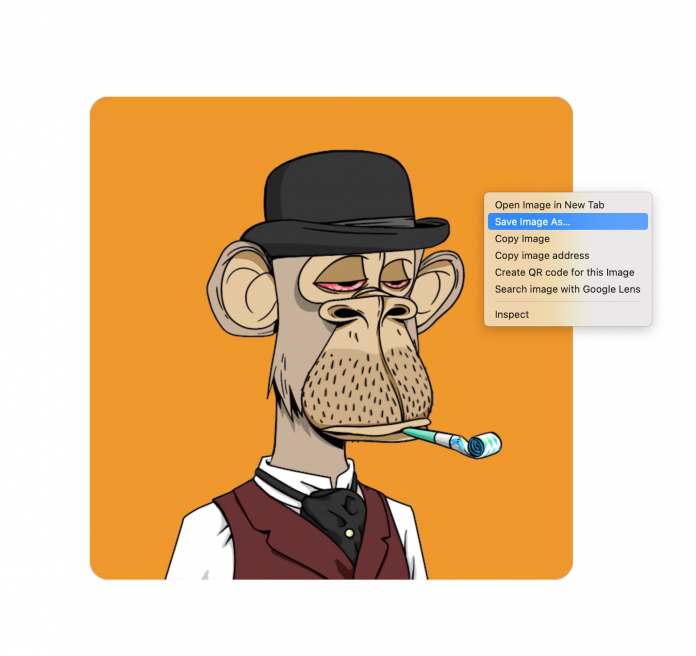 NFTs have broken into the mainstream. We live in a world where Justin Bieber casually buys a commonish BAYC Ape for way above the floor price just because he liked him so much, and NFTs are a subject for Superbowl commercials.

Naturally, people have lots of opinion on the matter. Some think NFTs are a breakthrough technology that’ll change the world. Others think they’re a total scam that’s destroying the environment (and we’ve actually already debunked that claim). Some people think NFTs enable a new renaissance, others think they ruin art. And then there’s the right-click savers—and today, we’re going to talk about those.

As an NFT marketplace, some might call us somewhat biased in talking about this. But we realize that no technology in the world has ONLY had positive impacts (unless you consider maple syrup pancakes a technology). Just like that, NFTs have advantages and disadvantages.

Today, we’ll be looking into one of the most infamous myths about NFTs: you can just right-click and save that extremely expensive jpeg everyone is talking about.

Technically you can right-click and save an NFT, but it won’t have any effect whatsoever

“JPG File Sells for $69 Million, as ‘NFT Mania’ Gathers Pace” titled the New York Times when Beeple’s Everydays sold for $69.3 million. Ever since then, many people have been confused: Why would anyone pay millions (or even pennies) for something they can save to their computer in seconds?

Technically, this myth is true. You can save NFT art to your own computer and use it as your screensaver, print it out or even go as far as to set it as your profile picture on Twitter (and lose a lot of cool points in the web3 community). Shocking, right?

However, the point of NFTs is not that only the owner gets to view the artwork.

In many ways, right-click saving actually makes the original NFT more valuable. That might sound odd, but hang in there. Here’s an example:

Imagine a parallel universe where you own the Mona Lisa, painted by Leonardo Da Vinci in 1503. But unfortunately, nobody knew about the painting. It’s never been stolen, never hung in the Louvre and has never been used in memes, t-shirts or beach towels. Worse: In this timeline, Leonardo Da Vinci wasn’t an influential artist, but became a footnote in history.

How much could you sell the painting for? Sure, it’s centuries old, but it probably wouldn’t be the priceless art it is today.

Wouldn’t you much rather have the Mona Lisa in this universe, where everyone knows it as the world’s most famous painting—where it’s printed on clothing, turned into memes and replicated millions of times?

The point of owning art—physical or digital—isn’t that nobody else gets to view it.

Right now, you could download the Mona Lisa as a JPG file and print 100 copies. But that would make her more culturally significant—not dilute the value of the original.

That’s why wealthy collectors often loan paintings they own to museums. Maybe they just love to share something beautiful with the world. But after being included in an art show, paintings also fetch higher auction prices.

NFTs might be based on art, but normally they aren’t 100% about art

Another reason why right-click saving the art isn’t useful: NFTs aren’t always about art. Many NFTs unlock exclusive digital and physical experiences. These are “token-gated”, meaning you can only access them when you connect a wallet that holds the NFT.

An example is Kevin Rose’s Proof Collective. Currently at a floor price of 120 ETH (More than $350,000), the art is a simple access card. That’s because it lets owners access an exclusive online community all about NFTs—a place where they can meet other enthusiasts, artists and collectors. Also, it gave early access to the Moonbirds mint.

And that logic applies to more conventional projects, too: You could of course right-click-save that Bored Ape—but would you qualify for the $APE airdrop worth thousands of dollars by having that jpeg stored somewhere on your computer? The answer is no.

To summarize: Yes, you can right-click save any image on the internet. But that only makes the original more valuable to those who believe in digital ownership.

And you can’t right-click save a community and its sense of belonging.

Previous article
The Merge and the Ethics of Ethereum | by Coinbase | Apr, 2022
Next article
Optimism’s token launch could elevate its Rollup status