Bitcoin faucet platform FreeBitco.in has launched a betting system for Game of Thrones that will reward winners in Bitcoin.

Predict the Final Outcome on Game of Thrones

FreeBitco.in has launched a new betting feature on its website with a few events already listed. One of such events is based on Game of Thrones, the hit TV show from HBO.

Platform users can predict who will sit on the Iron Throne of Westeros at the end of the eighth and final season of the show which is currently airing. 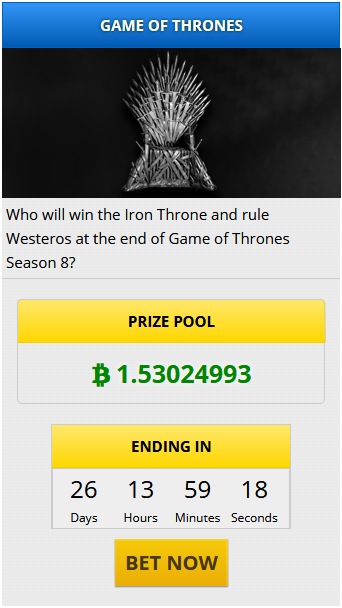 The betting pool for Game of Thrones employs a time-weighted multiplier system which means that the rewards decrease as time progresses. This feature also encourages the early placement of bets.

Users who place wagers earlier will receive a larger share of the final price pool which grows with each bet placement.

So far, bets on Jon Snow winning the Iron Throne and ruling the Seven Kingdoms leads the way with about 45 percent of wagers placed. Other options include Tyrion Lannister, Daenerys Targaryen, and Bran Stark, among others.