What is a token, coin and how do they differ 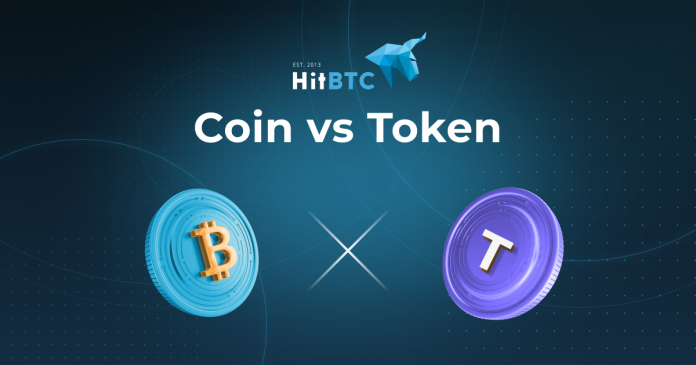 When it comes to using the terms “coin” and “token”, for some people, these concepts are almost the same. Although they are fundamentally very similar, there is still a key difference. Let’s figure out how a token differs from a coin in cryptocurrencies.

Differences between tokens and coins

The main difference that is always in sight is the lack of its own blockchain, a token doesn’t have one. Rather, it runs and functions on an existing platform. The most popular token platform  is Ethereum (ETH), created by Vitalik Buterin who initially aimed to  make it convenient for users to create their own projects on an existing blockchain.

There are other fundamental differences between tokens and coins which include:

A token will become a currency only if it gets, for example, on a crypto exchange.

In other words, tokens are a unit of account with a function in the digital world — something like a digital receipt from the creator of the token that they undertake to give you something.

Tokens can be compared to food stamps that are issued and accepted only in a particular canteen: they may have value in it or nearby, but they will not be accepted in other restaurants. Only, in reality, such a canteen might be a cloud data storage with special functions, where the more tokens you have, the more disk space is available.

According to their purpose, there are several types of tokens:

Payment tokens. They are used as a means for calculations.

Service tokens. They are issued as a unit of calculation within a certain community (platform).

Exchange tokens. They are used as fuel for conducting exchange operations and bring additional bonuses, discounts, and dividends to traders.

DeFi tokens (suggestion) form part of an independent financial ecosystem where users can interact without the involvement of a third party.

For example, the HitBTC token (HIT) is a service token of the crypto trading platform. Its holders receive discounts on trading fees, low commissions for trading pairs on the exchange, and other benefits.

In addition to the fact that the HitBTC crypto exchange has its own token, there are more than 800 exchange pairs – tokens and coins of all kinds which can be bought and exchanged on the website or in the HitBTC App.

Coins are digital currencies that run on their own blockchains. A coin’s main characteristics  are   as a unit of payment, a means of exchange, and that it has it’s own value. A coin does not require any other platform for it’s work, – an example is Bitcoin (BTC), which is the native currency on its blockchain.

Tokens do not have their platform, but function on the blockchains of other cryptocurrencies, therefore they are dependent. For example, a large number of tokens work on the Ethereum blockchain: OMG, AAVE, GALA, and others.

The main difference between coins and tokens is that coins work on their own independent blockchain, whereas tokens are created based on an existing one.

Most tokens are created to gain access to smart contracts and dApps, but they can also be used as shares, votes, and ownership certificates. They are usually generated during crowdfunding (ICO/ST). Crypto coins are a digital means of payment and are generated through mining or staking.

The HitBTC crypto wallet is a free and simple solution for beginners.

App on Android and iOS.

Don’t forget that you can trade on our platform from your mobile device. Start today by downloading the HitBTC App on Android and iOS.

This article came directly from HitBTC, at https://hitbtc.com/blog/what-is-a-token-coin-and-how-do-they-differ/