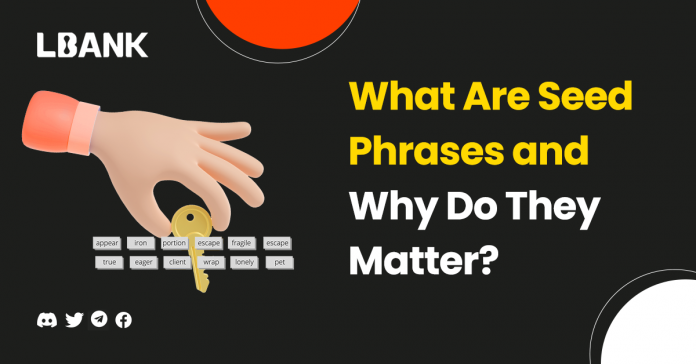 What is a seed phrase?

A seed phrase, also known as a mnemonic phrase or seed, is a list of words used to generate a private key for a cryptocurrency wallet. Seed phrases are generated whenever a new crypto wallet is created, whether it is a hardware wallet, a software wallet or web wallet.

The phrase typically consists of 12–24 words and is used as a backup to restore a wallet if it is lost or stolen.

A seed phrase can generate a master seed, which can be used to derive multiple private keys.

In general, the following information is included in every seed phrase: A number that represents the order of phrases, which should remain unchanged for security purposes; two letters to symbolise each word in the phrase; and finally, five numbers that represent the offset where each word begins. An offset signifies the start and end of a phrase. It is especially useful in situations where you need to provide precise instructions. For example, if a phrase has three words with an offset of 0–2–3 , then “one” would be the starting point.

The importance of a seed phrase

Seed phrases are vital parts of cryptocurrency security and should be treated with care.

Anyone who has access to a seed phrase has access to the funds in the associated wallet. For this reason, it is crucial to keep seed phrases safe and secure, such as by storing them in a physical safe or encrypting them.

A seed phrase can be used to derive a deterministic wallet, which means that if you lose your wallet, you can use the seed phrase to recreate it and regain access to your funds.

How to generate a seed phrase

There are a few different ways to generate a seed phrase. They can be described as follows:

Most cryptocurrency wallets produce a seed phrase when they are first set-up. Because the process is frequently mechanical, there aren’t many options available for changing the seed phrase’s settings. The majority of users, who accept the produced seed phrase only once and never alter it again, should utilise this technique.

A calculator-based seed phrase, which is an analog way for offline phrase generation, can generate a seed phrase by selecting characters at random from a list, using a calculator with random features. These, however, have security flaws since they need two devices to work — a calculator and an air-gapped computer that does not have secured networks.

Some apps allow users to construct an encrypted “vault” that contains their seed phrase and keeps all of their digital assets safe, in addition to creating a seed phrase for them.

Example of a seed phrase

The “Bitcoin Improvement Proposal: 39” (BIP39) enables the use of a master seed, wallet backup, recovery phrase, and mnemonic seed.

BIP39 permits creating a backup set of private keys for a specific wallet using a mnemonic phrase or sequence of phrases. The words are drawn from a particular 2048-word list known as the BIP39 word list shown above.

Are seed phrases and private keys the same?

Seed phrases and private keys are two important components of cryptocurrency wallets, but they are not the same.

While both seed phrases and private keys have their own unique purpose and use cases, they both serve as an important security measure for cryptocurrency wallets.

A seed phrase can also be used to generate private keys and restore access to wallets.

How to keep your seed phrase safe

For obvious reasons, it is extremely vital to keep your seed phrase safe and secure. Anyone who has access to your seed phrase can also access your funds, so it is important to choose a phrase that is both easy to remember and difficult to guess.

It is also a good idea to write down the phrase in multiple places and to store it in both digital and physical form.

What occurs if a seed phrase is stolen?

Seed phrases are an important part of cryptocurrency security, as they allow you to generate a private key that can be used to access your wallet. If you lose your seed phrase, you will also lose access to your wallet. For this reason, it’s important to store your seed phrase in a safe place, such as a password-protected document or a physical safe.

Generating a seed phrase requires you to follow certain steps in order to ensure the safety of your funds. There are a few different ways to generate a seed phrase, but using a dedicated tool like mnemonic-seed seems to be more popular. This tool will help you create a strong and secure seed phrase that you can use to recover your wallet.

This article came directly from the LBank blog, found on https://medium.com/lbank/what-are-seed-phrases-and-why-do-they-matter-a7a2d51923bb?source=rss-87c24ae35186——2