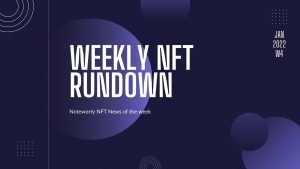 The article below came directly from the Mintable.app blog, found on https://editorial.mintable.app/blog/

Meta has announced plans to launch an NFT marketplace, as well as NFT profile picture support for Facebook and Instagram. This move could be great for mainstreaming, but the crypto community is largely skeptical of the conglomerate’s attempts to capture more power and market share in the NFT industry.

Twitter announced last September that they would soon add NFT support for profile pictures. Now, the feature is live – but limited to Twitter Blue subscribers on iOS. It’s a logical step for the leading social media platform among NFT / crypto enthusiasts, but the rudimentary feature has raised concerns about security and the authenticity of the connected NFTs.

Read more at the Verge.

Coinbase has announced that they will allow credit card purchases of NFTs on their upcoming marketplace, to make the digital assets more accessible. Credit card purchases are possible because of a partnership with Mastercard, a leading credit card firm that has been investing heavily into the NFT / Crypto industry.

Hong Kong activists are trying to save hamsters with NFTs

Following a decision by the Hong Kong government to cull hamsters over possible transmission of COVID-19, artist-activists have launched a collection of 2,000 pixel art hamsters to protest against the killing of the animals. Part of the proceeds will be donated to shelters.

Walmart gears up for NFTs and Crypto Payments

Walmart has filed several trademark applications with the US Patent and Trademarks Office that indicate a possible move into NFTs. A spokesperson for Walmart told Engadget that the company was “continuously exploring” how new technologies might influence shopping, and that it “routinely” filed trademarks as part of that process. Might be nothing, but with more major brands entering the NFT space, it’s unlikely that Walmart is going to sleep on this.

The article above came directly from the Mintable.app blog, found on https://editorial.mintable.app/blog/