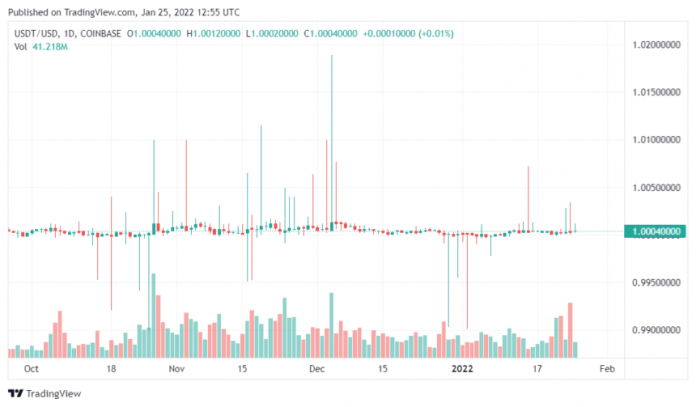 There are have always been tussles recently between the top two most popular stablecoins, USD Coin (USDC) and Tether (USDT). But recently, USDC is creating a notable milestone as it out-runs Tether on the Ethereum network in terms of the total supply.

Since 2016, Tether seems to be the top stablecoin, ranking the most popular. This is after its market sharing with BitUSD and NuBits (USNBT). From its launch in 2014, Tether operated on Omni.

However, it later emerged in the limelight as BitUSD and NuBits lost their shedding users and dollar peg, which threw them into obscurity.

In 2018, USDC came into view as a solid competitor for Tether. While Tether seems to be under a cover due to some uncertainties with its backing, USDC appears with more transparency and adequate regulation.

The current supply of USDC and USDT on Ethereum is 40.6 billion and 39.82 billion, respectively. This now puts USD Coin ahead of Tether on the network.

However, Tether still stands as the most notable stablecoin having a total supply of 78.5 billion tokens. In addition, the asset has about 38.7 million tokens on the Tron network representing almost half of its total supply. Also, Tether tokens are available on Solana, BSC, Polygon, Huobi ECO Chain, Avalanche, and other 13 Chains, as well as L2 solutions.

Over the years, the gradual decline of Tether’s public images is attributed to lots of doubts surrounding its backing. Eyebrows have been raised on both the collateralization of the stablecoin and the management strategy of its reserved funds.

In its move to clear the numerous doubts, double Consolidated Reserves were issued. These reports came from Moore Caymon, an accounting firm, in 2021 concerning the financial reserves of Tether.

The latest financial report of the stablecoin disclosed its $30.8 billion holdings in an unclear commercial paper. This was in addition to other assets which are backing USDT.

On its part, USDC boasts of a total supply of 45.7 billion tokens running across 21 different Chains and L2 solutions. In addition, USDC has two key issuers; Circle and Coinbase, a digital payments service. Moreover, Circle is backed by China Everbright Bank, Bitmain, and eight other companies.

The Circle depicts high transparency on its reserves; it is still below the expectation of some critics. Following an announcement in August 2021 from Emile Choi, the President of Coinbase, there was a complete shift to cash and US Treasury bonds in the USDC reserves backing.

A report from an Independent Accountant by Grant Thornton showed that the implementation of the shift took place on October 27, 2021.