Understanding Bollinger Bands & How it Works For Crypto Trading | by LBank Exchange | Jan, 2023 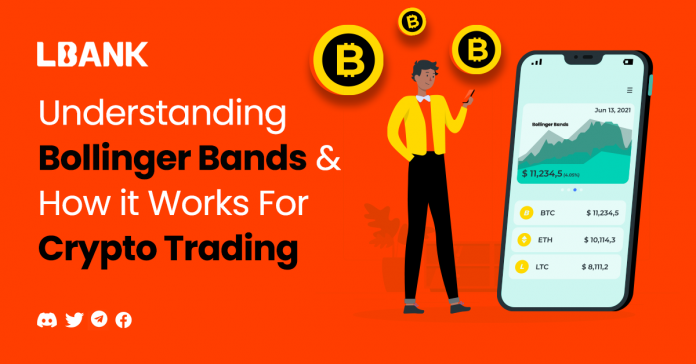 Bollinger Bands was introduced by John Bollinger as a technical trading tool in the early 1980s. The concept was born due to the need for adaptive trading bands and the realization that volatility was not static, as was widely believed, but dynamic.

Bollinger involves the strategy of using moving averages with two trading bands. This is pretty similar to using the basic moving average. However, unlike using a percentage computation from a typical moving average, Bollinger Bands add and subtract a standard deviation calculation. Read on to discover what this indicator entails and how it works.

In simple terms, Bollinger bands measure volatility in price action and tell a trader points in time where the price is highly likely to continue or reverse direction. Bollinger Bands are essentially used to define relatively high and low. This is an indication of prices being “high” at one end and “low” at the other end. Interpreting this can help traders identify unusual price movements, as well as compare the price action to indicator action to effect better trading decisions.

Bollinger Bands are also used to identify oversold and overbought situations in the crypto markets. It is frequently used in crypto trading but has been applied in other financial markets, including stocks and forex markets. The rule of thumb is when Bollinger bands close outside of a 2.0 standard deviation, upper or lower band, a reversal is likely to occur because the price will spend 99% of its time inside the bands, so when a close outside a band, we have a high probability of a reversal.

Pretty much the same as using Bollinger Bands in traditional markets, cryptocurrency trading is no different, only that volatility is more prevalent, opening up more trading opportunities and signals from this specific indicator.

Here is how you should set the Bollinger Bands depending on the trading style:

The Bollinger Band theory will not indicate exactly which point to buy or sell an option or stock. It is meant to be used as a guide (or band) with which to gauge a stock’s volatility.

The spacing, or width of the band, is dependent on the volatility of the market. As a result, it gives traders a clear indication of where prices will go and when to enter.

2. Timing Entry Levels in a Trend

We all know long-term currency trends last for months or years — but we need to get in at the best risk/reward level. Bollinger bands will help traders spot trends and determine a good entry. All you do is watch for dips toward the center band — and enter in the direction of the trend — it really is that simple!

Overall, Bolligar banks are a primary charting tool to get the big picture — and the best timing indicator to filter out “false” signals in the crypto market. Bollinger bands are a resourceful tool — but they need to be combined with other indicators. As with any single indicator, they should not be used alone.

This article came directly from the LBank blog, found on https://lbank-exchange.medium.com/understanding-bollinger-bands-how-it-works-for-crypto-trading-698773bf91c7?source=rss-87c24ae35186——2