All eyes have been on Bitcoin over the past few hours as it tapped a two week high and monthly resistance. BTC is not the top performing crypto asset at the moment as that accolade goes to Tron.

Bitcoin dominance may have hit a three month high over 71% again but that has largely been at the expense of Ethereum and XRP. 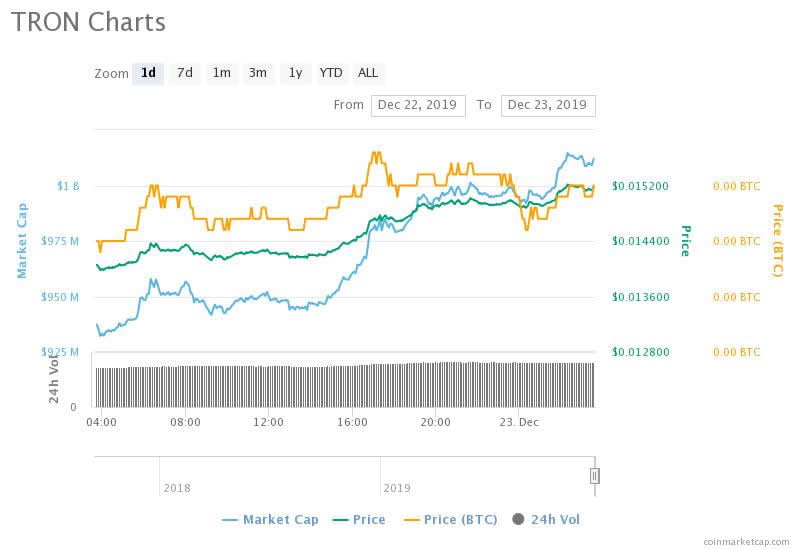 Market capitalization has just surpassed a billion dollars as Justin Sun’s token chases down Tezos for that top ten position. At the time of writing the two are close and there is only $20 million in terms of market cap difference since XTZ has fallen back today.

Like most of its brethren though, Tron is down on the year taking a hit of over 18% since the beginning of January. The story is similar for most of the altcoins as they return to crypto winter levels.

The momentum for the Ethereum rival appears to have been driven by an interactive trading/gambling game. As usual with Tron there has been an excess of fanfare in the run up to just.game which went live a few hours ago with Sun currently live streaming.

Have you tried out https://t.co/LcJV0sMp2M? It's a new game developed by @TeamJustDev on #TRON network!@JustinSunTron the founder of TRON Network will be live on DLive shortly to introduce the game to the community.

According to the blurb on the website the platform is;

“An implementation of the world’s first self-decentralizing artificial intelligence that reaches beyond the boundaries of its own software in order to sustain itself.”

The Tron based game is more of an experiment which involves buying virtual ‘gift boxes’ with TRX that increase in value when more are purchased by others after your initial one. A portion of the price also goes into a jackpot.

Opening the boxes at any time will end the game and yield a 2x reward in TRX. The dilemma is that they may become far more valuable over time and there is a greater chance to win the jackpot for those holding on to the boxes. It also encourages more to buy in and hold for greater rewards targeting the human greed and FOMO emotions.

It sounds rather similar to HEX in that the system works on a pyramidal basis. The overall outcome has been an increase in TRX prices which of course good news for token holders and game participants alike.

Within 30 minutes there had been over 250 million TRX transacted according to DappReview.

Powered by Fomo3D Team, the offical JustGame is live now. The transaction volume is over 250 Million TRX in less than 30 mins!

Either way, Tron is outperforming its brethren, including Bitcoin, at the moment so from that aspect the experiment has been a success.