The Crypto Price Crash Is Not All That Bad, Here’s Why You Shouldn’t Mind The Bears 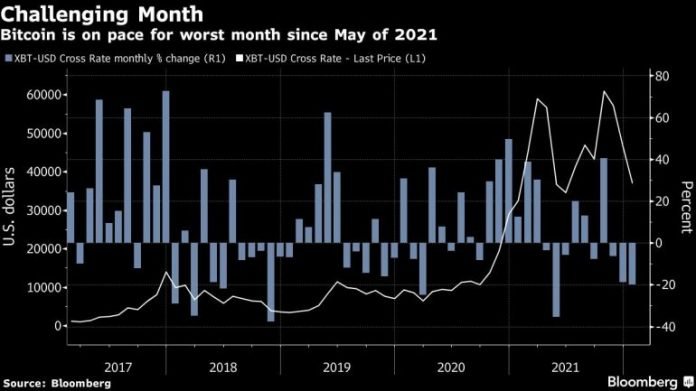 Cryptocurrency prices are plummeting. According to one estimate, crypto assets have lost around $1.35 trillion ($1.9 trillion) in value since November, with some crypto price crashing by as much as 80%. Many investors are in a tight spot.

The good news is that world economy isn’t poorer. As a result, there won’t be much of an economic response to the new prices.

The recent crypto news has been dominated by the price collapse of numerous major currencies.

Since November, the price of bitcoin has been dropping. The price of cryptocurrencies has also dropped in the last week, according to reports, due to new US regulations on digital assets. Bitcoin’s price dropped from $69,000 in November to $32,951 last week.

Ethereum’s price has plummeted to roughly $2,400, down from nearly $5,000 at the end of 2021. Top cryptocurrencies like XRP, Solana, BNB, and Cardano have had their value plummet by up to 30%. The big crypto meltdown of 2022 wiped out $1.5 trillion from the industry as a whole.

Many have held on to the believe that US regulations contributed to the bloodbath. Due of the national security risks posed by Bitcoin, the Biden administration is attempting to develop a strategy to regulate cryptos.

As a result of the Federal Government’s measures, traders have been urged to sell their Bitcoin holdings in large numbers.

The US Federal Reserve’s policy changes have an impact on Bitcoin pricing.

The Federal Open Market Committee will raise the double monthly rate, cutting asset purchases, according to Federal Reserve Chair Jerome Powell. The Federal Reserve implemented these steps in order to curb inflation and its detrimental influence on Bitcoin prices.

As the month closes, many investor are in cautious optimism. However, inflows have turned positive since last week.

The news wasn’t all good, as Ethereum continued to face unfavorable sentiment, with $27 million in outflows. This was the eighth week in a row that ETH-focused funds have seen outflows. Outflows were also recorded during the week for Solana, Polkadot, and Cardano products.

Since December, institutional investors have been selling digital asset products in droves, taking profits and reducing their stakes during market selloffs. According to CoinShares data, Bitcoin funds have suffered a net outflow of $131.8 million so far this year. There have been $111.2 million in withdrawals from Ether funds.

Between November’s peak and January’s lows, Bitcoin has lost approximately half of its value. According to Goldman Sachs’ Zach Pandl and Isabella Rosenberg, this loss puts it at “the low end of the range” of large drawdowns in the past. Since 2011, the pair estimates that the coin has had five big pullbacks from all-time highs, with an average peak-to-trough fall of 77 percent. They noted in a note that the decreases continued on average seven to eight months. According to them, the highest cumulative Bitcoin fall, a loss of 93%, occurred in 2011.