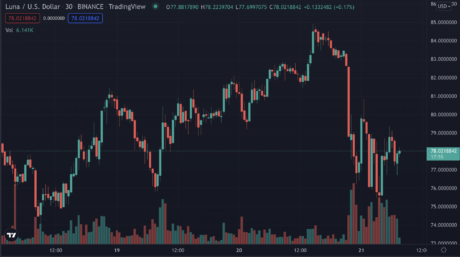 The price of Terra has been choppy in the past few days despite the broader market regaining back it’s strength slowly. In the last week, the coin plunged by almost 30%.

At press time, LUNA was priced at $50.72. Earlier yesterday, LUNA attempted to trade above the $52 price mark. The global cryptocurrency market cap was at $1.83 Trillion after an increase of 1.6% in the last 24 hours.

Trading volume of Terra also depicted an appreciation by 75% at press time. This rise in trading volume could be tied to resurgence of buying strength in the market.

Resistance mark for the coin was at $60.10. Terra’s sharp price sentiment could have been influenced by Wonderland Project’s Fiasco. LUNA’s prices started their southbound journey after it was discovered that Michael Partyn was responsible for looking after Wonderland’s treasury.

LUNA’s prices stood at 69% lower than its All Time High. Terra’s local support level for the coin awaited at $43.60. LUNA has last traded around this level in the month of November. LUNA’s prices hadn’t fallen below the $50 price mark as the coin considered the aforementioned level as a robust support level.

Buying strength in the market had also been in the bearish territory for almost a week or so. Looking at the technical indicators, it is difficult to say if LUNA will maintain a similar price action over the next trading sessions.

Terra was in the opposite price direction of its own market trend of the past week. After trading in a descending channel, Terra managed to break on the upside.

The chart also started to display recovery as soon as that happened. Support level as mentioned above was at $43.60, a mark the coin last traded near in the month of November. Two resistance levels for Terra were at $60.10 and at $68.15.

The Relative Strength Index is responsible for depicting buying strength and pressure in the market. For the past week, RSI remained below the zero-line indicating a period of continued sell-off.

The indicator also dipped below the 25-mark displaying oversold tendencies of the market. At the rime of writing however, as Terra zoomed up it’s chart RSI moved up in anticipation of recovery in buying strength, however, a minor downtick was also seen on the indicator at the press time.

On Balance Volume depicted a rise, signifying that inflow volume has also started to pick up. In return, this reading hinted at a positive price action. Awesome Oscillator depicted the market strength.

In case green signal bars remain underneath the half-line it is too quick to say if prices would tun bullish. Relative Strength Index already indicated towards a possibility of buying pressure falling as demonstrated by the tiny downtick.

Previous article
Shiba Inu Enters The Metaverse, But Will This Help Its Price?
Next article
The Crypto Price Crash Is Not All That Bad, Here’s Why You Shouldn’t Mind The Bears