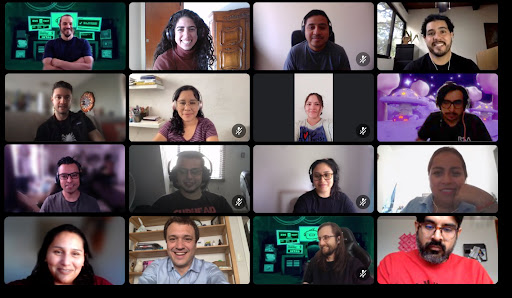 The following is an update from Ethereum Foundation Fellow Chuy Cepeda.

Our identities hold immense power. In a time when people take great pride in using multiple pseudonyms or personas, we often think about how to identify ourselves. I identify as a native of Monterrey, Mexico, a Latin-American, a son, brother, father, husband, engineer, Ph.D., entrepreneur, dog lover, hitchhiker, and a believer that democracies are suffering.

Looking back at a time when I started meeting people from different countries and gaining a better understanding of their access to public services, I recall becoming aware of how far away this reality was for Mexicans. I realized that as my home city grew, many decisions made by the government were unplanned or colluded. I learned that my home country of Mexico was one of the least favored countries according to Transparency International’s Corruption Perception Index. I realized that these problems are not limited to me and my home country, but affect people everywhere.

I now feel a profound empathy for anyone who can’t look to the government for better transport, proper education, and health services. All the while, I see technology making bigger and bigger impacts in the daily lives of people all around Latin America and beyond. Think for a minute about this: while people are becoming more digital and expect personalized and real-time services, public institutions are unable to meet those expectations.

Citizens face inefficiencies, a lack of transparency and red tape, and a terrible experience when it comes to interacting with their governments. This is a global crisis of institutional agility and trust that erodes possibilities to prosper, and it’s why Democracy as an ideal is suffering.

So I decided to incorporate a new part of my identity: I co-founded OS City to improve the landscape of government services in the modern world, essentially by bringing public institutions into the web3 paradigm. In other words, to use blockchains to digitize government services and give citizens their decentralized digital identity.

From birth certificates to driver’s licenses and academic records, when we are asked to identify who we are as citizens, this is about sharing our personal information or credentials, usually notarized by the government of the place we come from. Depending on where that is, those records could be located in a fancy networked database (as is the case for Estonian citizens), but more likely what we need when we need an ‘official identity’ actually resides in the specialized passport printers of a stuffy government building, or spread about in filing cabinets of various state bank branches, or maybe it’s nowhere at all!

When we “use” these representations of our identity, what we are actually doing is getting separate bureaucratic systems to interoperate. If the visa stamps from one customs office in Country A fit onto the passport pages of Country B, that’s ‘good enough’ for us in most cases. But when that basic interoperability has stricter requirements, or when it breaks down, that’s where we get into trouble. Office A requires an original stamped document from Office B, which is closed after 3pm, and requires a notarized letter from Department C, which is in a different part of the city and needs approval first from Office A… some of us are all too familiar with being trapped in this sort of prison of paperwork. This is where collusion and corruption are born, where we start the snowball effect that ends up in a terrible response to social distress, economic growth, and climate change.

The fundamental challenge is that everyone must have an identity, but it is simply not true that everyone has an interoperable representation of identity. That’s where I believe we can do better. It’s not going to be easy, and it’s certainly not going to happen all at once, but if we start in the right direction, we might end up in a place we want to be at. Part of our work to solve these issues led us to develop an application-specific wallet called Soberana, which is meant to be used to hold and manage digital identities.

Blockchains are by design built from interoperable and standardized components that can combine and integrate into all sorts of ways. Any blockchain built to be Ethereum or EVM-compatible will follow the same set of standards. So at Soberana, that is our starting point. Unfortunately, we work in a design space that must allow for some degree of centralization, i.e. a government authority must approve a record or identity.

Nevertheless, we start with a small kernel of identity that is still compatible with the open, permissionless systems of the web3 world. Starting from that compatibility makes it a lot easier to improve and build more complex systems around it over time – a network economy of digital services, both centralized and decentralized. The goal here is maximum compatibility for a digital identity: whether you’re using it for a centralized government notary, a proprietary banking transaction or a public NFT registry, your ID should move between those systems seamlessly and securely.

As we add more and more functionality, we’ll be able to verify, port, and share that identity through a whole suite of government services that all connect to each other. From marriages to mortgages, all of the paperwork that requires identity could be de-bureaucratized and made painless by using the right infrastructure. By starting small and with this first piece of the puzzle, we pave a way towards broader institutional reform, using technology wisely to increase the legitimacy of the public sector as a whole.

At the moment, these documents are limited to commercial permits, construction permits, city inspector credentials, tax payer statements, among others; but we are working to expand and incorporate as many documents as possible to be compatible with local governments in Mexico and Argentina.

I understand now that bureaucracies are merely inertial inefficiencies of governments that have lost the excitement of innovation. That’s why I believe blockchains have an enormous potential to lead us into a new era of openness and collaboration that helps to increase the legitimacy of the public sector. With the help and support of public sector leaders, we can create radical change in the government sector, and even make it a prosperous field for business, fostering the digital, economic, and social transitions of our nations.

My short-term vision is to be able to offer citizens the possibility to own their official records, to eliminate duplicate efforts in every government process, to make government transactions traceable and transparent, and to foster the first government standard for blockchain verifiable credentials. This will hopefully show the international public sector that interoperability can succeed when we put citizens in the center, when innovation promotes regulation and not the other way around.

In the long term, I hope that we can all work together to rethink governance and identity. We are starting by rethinking and reinventing the way governments, individuals and companies interact among themselves; in a decentralized digital world, interactions are not state or market-centric, but community and citizen-oriented. This implies a new ecosystemic vision where the government, startups, academia and civil organizations jointly explore public problems, seek (and transfer) appropriate solutions and feed on their learnings. It is not the state hiring suppliers, but the state interacting with other actors to solve society’s most pressing problems. I believe a new digital identity is one step that will allow governments, citizens, and communities to get the most out of blockchain technology, fostering prosperity through a network of citizen-centric digital services.

For more about the Ethereum Foundation Fellowship Program, read this blog post.