Shiba Inu Enters The Metaverse, But Will This Help Its Price? 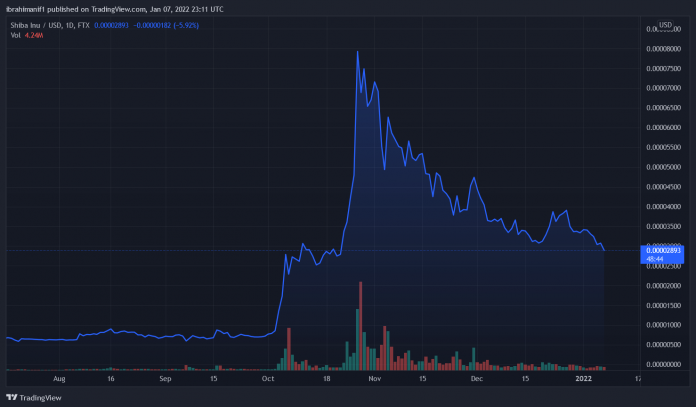 Meme coin Shiba Inu recently announced its move into the metaverse. The ‘Shibverse’ as it’s called will usher the cryptocurrency into a booming space, presumably to provide more utility for the digital asset. This news is no doubt well received by the community as it allows SHIB to participate in what is a booming industry. But how has the price of the digital asset reacted to this so far?

Shiba Inu, one of the most popular meme coins, and winners of 2021 has announced that it would be making its debut in the metaverse with the Shivers. It comes as no surprise as the team has been forthcoming about working on more use cases for the cryptocurrency. Previously, the Shiba Inu team had announced that it was launching its own game, where SHIB will serve as the utility token.

The announcement tweet has included a sneak peek of the metaverse, which featured a high-resolution picture of the popular Shiba Inu dog breed standing in the middle of the woods with what looks like a pickaxe in its mouth.

As promised, we are so excited to announce our first special surprise for the year #ShibArmy!

In 2022, we are reaching new heights and welcoming the #Shiberse 🌎. An immersive experience for our ecosystem and the Metaverse space!

We can’t wait to show you more. Woof! 🐶 pic.twitter.com/tCRQ1m1RiT

Given the popularity of the metaverse in recent months, it is no surprise to see more established projects entering the space. Social media giant Facebook (now Meta), is one of the most notable entrants, rebranding its name and image to fit into its metaverse mission going forward. The retail chain, Walmart, has also made moves into the metaverse according to a number of patent filings that were made public.

How Has SHIB Fared On The Charts

Following the announcement of Shibverse, the price of the digital asset had responded positively. One thing to note is that SHIB has been on a downtrend since it hit its all-time high last year and has continued on this path. News like these are expected to help the value of coins like Shiba Inu but the cryptocurrency seemed adamant to continue its journey downwards.

The announcement had triggered a small rally in the price of the altcoin, sending it above the $0.0000225 point. However, this would prove to be only temporary as it continued downward.

Sentiment for the meme coin remains firmly in bearish territory, which does not spell good news for the long-term performance of the digital asset. Additionally, the majority of Shiba Inu holders are now at loss, making it a less than profitable venture for crypto investors.

In the last 24 hours, SHIB has continued to trend low hitting a low point of $0.00002. As the new week is ushered in and the market begins to open up, there could be some upside seen in the price of assets, although it is unlikely that it will be significant in any way.

Previous article
Will Crypto Mining Survive Another Government Crackdown?…
Next article
Terra Recovers As It Posts 10% Gain In The Last 24 Hours