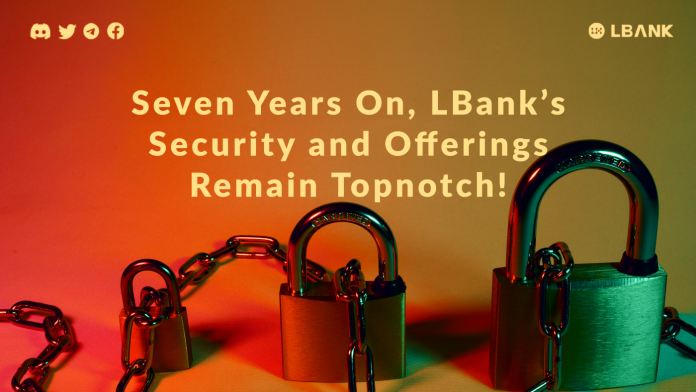 Securing cryptocurrency and blockchain assets remains a top priority among security firms, exchanges, apps and platforms. And while there is no cure-all solution or universally accepted approach to protecting digital currency and blockchains, there are steps that can be taken to protect information and assets against being stolen.

When Bitcoin and blockchain first came onto the scene, online cryptocurrency exchanges were inevitably hit with numerous cyber attacks. One of the most notable was when the then-largest exchange, Mt. Gox reported in 2014 that it had lost 850,000 Bitcoins to hackers.

Seven years ago, LBank became one of the early digital foreign exchange trading platforms to offer bitcoin as part of its currency pairs. Since then, the cryptocurrency industry has blossomed and the company has grown from a small startup to an established cryptocurrency provider that offers hundreds of trading pairs, and over 500+ cryptos.

With LBank, you can be sure that your coins are safer than they would be in any other cryptocurrency exchange. We have developed a number of security measures to eliminate virtually any chance of hacks or security breaches. We have deployed advanced cryptography to secure your coins and ensure maximum protection of your assets.

“Innovative Leader” — LBank stands out among cryptocurrency exchanges for its foresight and nimbleness. LBank has maintained one of the highest levels of security for its users among other crypto exchanges for over seven years now.

The leading digital asset platform is arguably the safest cryptocurrency exchange on the internet, especially when you consider that it has been in operation for the past seven years.

Moreover, unlike many other exchanges, LBank has not yet been beset by a hack or attempted theft since its inception. In fact, all accounts registered on its platform will remain safe at all times and no one can get access to their funds without permission.

More so, LBank offers its over 6.4 million users security, safety, and transparency. The platform is one of the top cryptocurrency exchanges because of its secure and flexible technology that allows for quick transactions, as well as its overall secure system design and protection against possible vulnerabilities that other exchanges have faced.

Since the cryptocurrency marketplace began in 2009, the security measures of the market’s exchanges have come under intense scrutiny. But it’s a point of pride for LBank, one of the largest and longest-running digital asset exchanges.

Like most exchanges, LBank has seen its fair share of cyberattacks. Although this industry can appear transient and lacking in longevity, it’s reassuring to see that the exchange remains secure and invests in long-term plans to protect its users.

LBank has worked tirelessly to ensure that safety is the unifying and overwhelming theme for the platform. Besides that, the exchange boosts deep liquidity and several good GameFi, DeFi, NFT, and metaverse projects for users to spot and grid as well as derivatives trading.

This article came directly from the LBank blog, found on https://medium.com/lbank/seven-years-on-lbanks-security-and-offerings-remain-topnotch-305f12a59fa8?source=rss-87c24ae35186——2