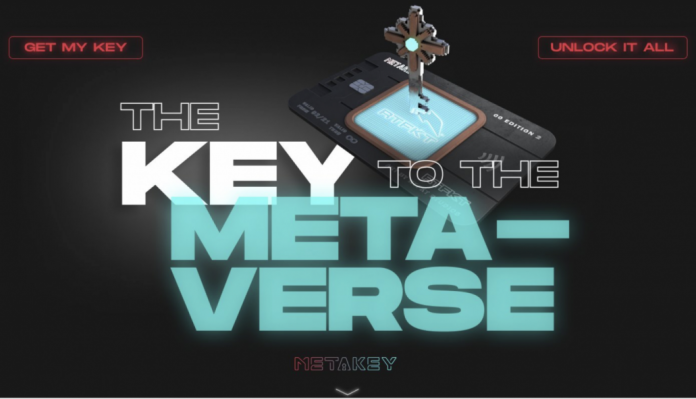 Want one NFT that can be used across multiple platforms to transform into avatars, game items, exclusive game perks, course material, virtual land access, activate discounts, and much more? For this week’s spotlight, we’re introducing Metakey – an NFT that does precisely that.

The Metakey was first conceived to push and explore the boundaries of NFT utility and interoperability— a single key that could offer the holder hundreds of use-cases across the web3 environment for years to come, and connect with the most compelling projects that emerged over this time. The goal is to partner with both legendary and emerging NFT-native artists to empower each edition to stand as collectible and iconic art pieces in their own rights.

Metakey is an experiment exploring the unlimited use cases blockchain technology can bring to a token. Metakey as a project attempts to integrate one key for as many use cases as possible, in as many projects as they can. It is not a game in itself but an NFT that unlocks the Metaverse. The owner of a Metakey has the power to unlock NFT bonuses in games that have partnered with them. It is an NFT that unlocks the Metaverse.

Metakey founder Matty S. AKA DCLBlogger was an early adopter of Decentraland and made his mark trading in virtual land prior to launching the DCLBlogger brand becoming a respected NFT community voice on Twitter and YouTube.

With games like Decentraland, The Sandbox, Neon District, and Ethermon already signed up, certain guns, tems, or outfits may be made available to you while in-game as long as you have a Metakey in your wallet. But this isn’t limited to gaming, you can also receive exclusive airdrops, discount coupons, giveaways, and even physical merchandise through owning a Metakey. There is a secret area open in Decentraland to those who possess certain art NFTs from a partner site attached to your Metakey. The number of Metakeys you own as well as which edition could possibly increase your chances of being part of these events.

Metakey has had 4 editions of the released so far and all of them have sold out.

The first three editions are considered “collectors Editions” if someone collects all three of them they become a “keymaster”. Being a “keymaster” will grant its user some perks.

One of the main focuses for Metakey is the Metakrew project, a 2D avatar available for all keyholders to mint for free.

For more information on this head to https://metakrew.com/

Find the list of all that has been offered so far here: Why you should hodl your Metakey.

What’s in the pipeline for Metakey?

They are currently pushing hard for more partnerships and integrations in the gaming sector. On top of that is the Metakademy which is a short video course available to all the key holders. Since their participation in the Metaverse Festival, Metakey is also looking at hosting their online virtual events in the future. As strong advocates for the Metaverse, their goal is to make it so that when you see any kind blockchain gaming, social platforms, virtual events, and frontier NFT utility explorations in the future, you will find the Metakey.

Find out more about Metakey