The Ethereum ERC20 token backed by Bitcoin has just 13 token holders and 16 transactions to its name, data reveals.

‘Wrapped Bitcoin,’ which debuted in January from BitGo, caused confusion among cryptocurrency figures when developers announced it late last year.

Now, in a further sign of the limited appeal of the many use cases identified for Ethereum by co-founder Vitalik Buterin, it would appear no one in fact requires Wrapped Bitcoin at all. 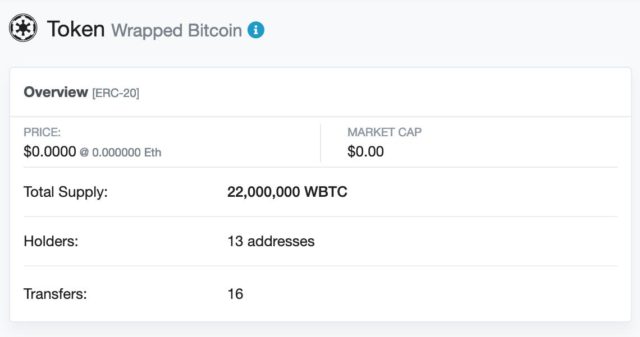 Speaking to Business Insider February 28 within the context of how and why he founded the largest altcoin, Buterin highlighted expanding use cases for Blockchain technology as a major impetus.

“…I started to realize that there were a lot more interesting things you could do with blockchains than just a single peer-to-peer currency, and this was something a lot of other people were starting to recognize at the same time,” he told the publication.

Bitcoin, he argued, was too narrow in its use cases at the time.