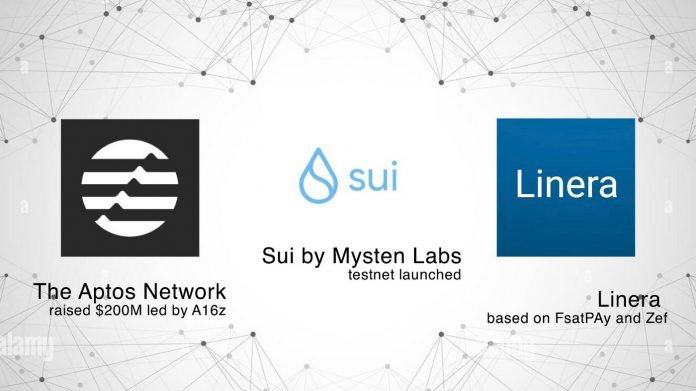 Meta’s former employees are quite busy starting their projects in Blockchain. This article will introduce you to 3 new layer1s developed by former meta engineers. All of them claim they are faster, low-latency, and scalable for massive use.

Aptos is launching their mainnet in Q3 of 2022. Many people are participating in their testnet. From the date from testnet1, there were 30,000 registered users and the addresses of full active nodes reached 1,8000. On the other hand, well over 100 projects are building on the Aptos network, with use cases spanning DeFi, NFTs, gaming, and more. Teams such as @PontemNetwork, and the Macalinao brothers @ProtagonistXYZ, @nutriosProject, @paymagic, @martian_Dao, @SolriseFinance, and many more are already writing code shipping and gearing up for Aptos mainnet around the end of September. We can say this one rouses the crowd in this bear market.

Why Aptos is so popular?

1. Team
Aptos was founded by Mo Shaikh(CEO) and Avery Ching(CTO). The two first worked together at Meta (formerly Facebook), specifically on the Diem blockchain and Novi wallet projects. Shaikh led Strategic Partnerships at Novi, while Ching was a Principal Software Engineer on the crypto platform team at Novi.

2. Big Investors
Aptos Labs has received many investments already. They raised $200 million in a strategic round led by a16z. Other investors include PayPal Ventures, Multicoin Capital, Binance labs, and so on.

3. The Move language
Diem’s main technical feature brought to Aptos is the Move programming language. This language was originally developed at Meta to provide security and scalability for Diem.
Diem was developed over the last 3 years and is relatively well developed and safe. Other security features include “DiemBFT v4”, derived from the HotStuff protocol designed at Diem.

4. Speed and scalability
Although Aptos is still in a testnet development stage and not fully operational, it is already outperforming competitors. Its TTF is less than 1 second, ranking it among ultra-fast chains like Avalanche and Fantom. In the right environment, its TPS can reach an industry-leading 160,000 Currently, the team plans to reach 10,000 TPS in the near term and is well on the way to 100,000+.

Aptos’s use of state sync is one of its most fundamental future-proofing advances, which also greatly improves speed.

Aptos has formed a community on discord and you can also see their updates from telegram and Twitter. Testnet 2 is ongoing if you want to participate. The Aptos Great Program is waiting for you if you are a developer!

Mysten labs and AptosLabs coupled with the Move Language have recently become the hottest topic in the Crypto world.
Similar to Aptos, Mysten labs(Sui) is also hailed as a highly performant layer 1 chain with high transactional throughput(TPS of 120,000+) and low latency(finality of less than 1 second).

Mysten-labs made some adjustments with the Move Language for better performance.

In summary, Sui takes advantage of Move’s security and flexibility and enhances it with the features described above to vastly improve throughput, reduce delays in finality, and make Move programming easier.

Sui testnet
The testnet is launching this August. Sui’s Testnet is organized as a series of consecutive “waves” 🌊. Each wave consists of two challenges: a “sink” (an operational challenge) or a “swim” (a Move-based Sui developer challenge).

Sui Wallet
The team announced Sui wallet on 15 Jul 2022. It is believed to improve users’ experience by allowing them to create an address, view, and manage assets on the sui network.

Another layer1 project that is developed by former employees of Meta/Novi is Linera. Mathieu Baudet, the founder wants to create the first low-latency blockchain that will scale as easily as a web2 application.

Based on FastPAy and Zef

The founder as an infrastructure engineer was particularly passionate about two protocols aiming to revolutionize blockchain scalability: FastPay and Zef. These ideas from these two projects will be applied to Linera.

The Linera project will develop and promote a new model of execution suitable for linear scaling. At the same time, ensure decentralization of the Linera protocol using state-of-the-art proof-of-stake mechanisms.

Linear is supported by some of the world’s leading investors in blockchain, including A16z, Tribe Capital Cygni Capital, and Kima Ventures. A16z leads a $6M seed round.

In addition
Follow their Twitter @linera_io for more updates. If you are finding a job, they are hiring!

Conclusion
Mysten labs and AptosLabs all have launched their testnet and products, while Linear is still working on it. Mysten labs and AptoLabs may be Solana’s competitors, given the recent poor performance shown by the chain halts. It is also mentioned by the developers that migrating to the Move language is much easier than that to the Rust from Solidity. However, it is still early to comment on it since all three projects are yet to be launched. Let’s wait and see @AptosLabs, @Mysten, and @linera_io.

This article came directly from the LBank blog, found on https://lbank-exchange.medium.com/new-layer1s-developed-by-metas-former-employees-c3f313d8b756?source=rss-87c24ae35186——2