Litecoin, the fourth-largest cryptocurrency by market cap, is struggling to maintain its interim bullish bias after reducing its mining rewards by half.

The LTC/USD instrument earlier today established a local high of 107.04 on San Francisco-based Coinbase exchange. The move uphill brought the pair up by 12.30 percent from the market open. That was also the time when the Litecoin blockchain was close to reaching the block height of 1,680,000, after which it would reduce its supply rate from the previous 25 LTC per 2.5 minutes to 12.5 LTC per 2.5 minutes.

At around 10:15 UTC, Litecoin underwent the so-called halving process. Fifteen minutes later, the cryptocurrency’s rate started heading downwards, as shown in the chart below. 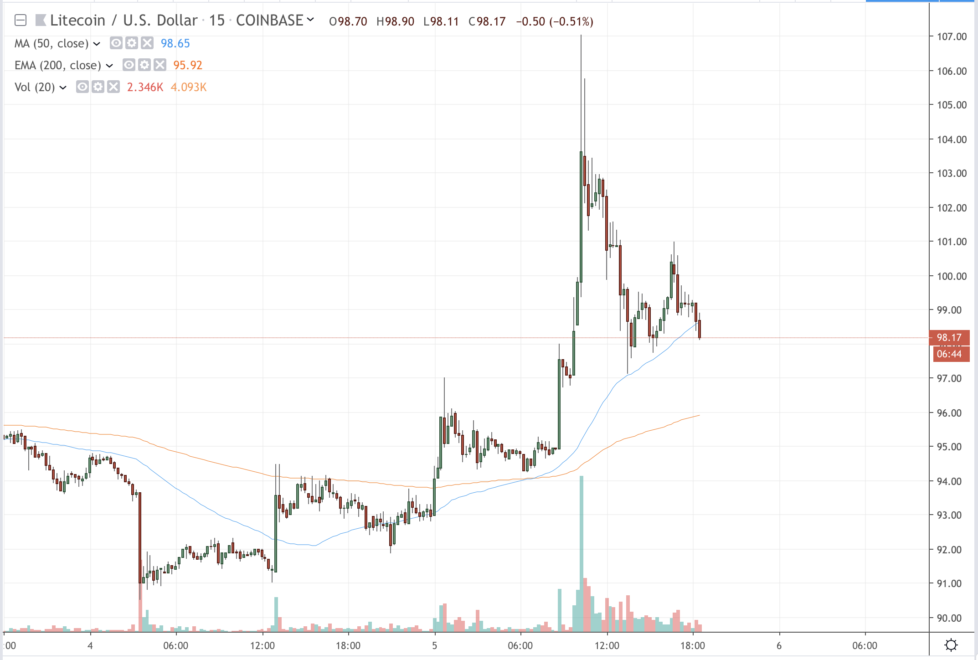 Up until 13:30 UTC, the LTC/USD rate had dropped to 97.11, down 9.28 percent from the local top. The move expressed the need of day traders to take their sessional profits home. At the same time, it showed the absence of a…

Bring it On: SEC vs Telegram Court Battle is Today

Ethereum was trading in a positive area this Wednesday after rising about 5 percent on a 24-hour adjusted timeframe. The second-largest cryptocurrency settled a new...

Bring it On: SEC vs Telegram Court Battle is Today

Bitcoinist.net: The court battle between the United States SEC and Telegram takes place today in New York. While both sides maintain their positions over the...

The Bitcoin Performance Since Difficulty Bottom chart shows the formation of a cup pattern peaking in spring 2021. This price prediction tool puts Bitcoin...