Big Four auditor, KPMG, has released the results of its seventh annual Technology Industry Innovation Survey. The survey, of 740+ global tech leaders across twelve countries, shows an increasing belief that blockchain will change the industry.

Nearly half of the respondents (76 percent of whom are C-level executives) thought that blockchain was ‘very likely’ or ‘likely’ to change their business within three years.

24 percent of respondents were neutral, and 27 percent felt this was “not likely” or “not at all likely.” 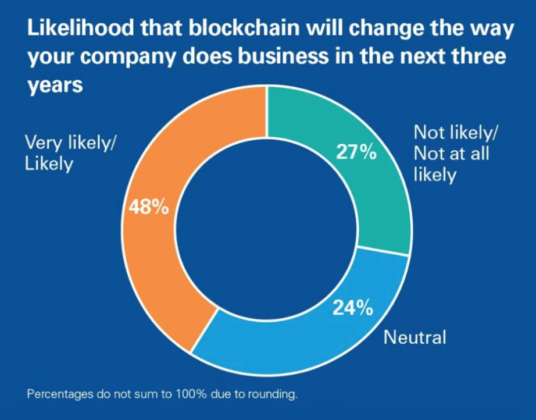 For comparison, in last year’s survey, a similar 28 percent of participants said blockchain was unlikely to disrupt their business within three years, or were unsure. However, last year 42 percent of respondents were neutral on the matter, with only 30 percent thinking this was “very likely.”

So while it seems that hardcore blockchain naysayers are still saying “nay,” a large chunk of the neutrals have swung. The belief in blockchain’s potential to…