Happy 14th birthday, Bitcoin!. Today is not just Halloween but also… | by FMFW.io 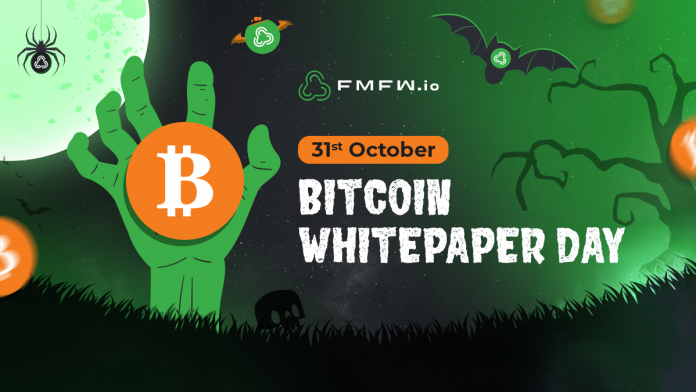 Today is not just Halloween but also another birthday for Bitcoin, the first cryptocurrency!

On January 3, 2009, this blockchain was “mined” by a person or group of people appearing on the Internet under the pseudonym Satoshi Nakamoto.

Satoshi Nakamoto is the pseudonym of the person or group who developed the bitcoin cryptocurrency protocol and created the first version of the software in which the protocol was implemented. Several attempts were made to uncover the real person or group behind the name, but they were unsuccessful.

A few months earlier, he had published an article about a hypothetical revolutionary new virtual currency with no issuing centre and a distributed register of all transactions. The idea for the decentralized digital currency concept is believed to have originated in the aftermath of the 2008 financial crisis. Nakamoto was not a fan of the modern banking system and wanted to eliminate habitual financial institutions and shady intermediaries, which he viewed as corrupt and unreliable. Hence the idea of creating a digital currency that would be managed more in the hands of the community.

This is the headline on the cover of The Times on January 3, 2009. It’s Nakamoto’s way of proving the date of the blockchain, and he chose a highly symbolic article to do so: it’s about the measures taken by the British Treasury Department to bail out the banks during the economic crisis.

At the same time, the “very first” (and in fact zero) block brought the first 50 coins — bitcoins — into the world. At the time, the BTC price was $0.0008. That was the reward for “figuring out” the block at the time. To this day, Satoshi Nakamoto is still a mystery. It is not even known if the man is alive today.

There are now trusted platforms such as FMFW.io, a cryptocurrency exchange that allows users to buy, sell and trade digital coins. But the first actual Bitcoin transaction took place in Florida on May 22, 2010, when Laszlo Hanyeczbought two pizzas from Papa John’s worth 10,000 BTC.

Otherwise, the first transaction between two people was between Satoshi Nakamoto and Hal Finney, an early bitcoin supporter — he downloaded the software when it was released. In return, he received ten bitcoins from Nakamoto. Therefore, he became the second person that owned the very first coin.

He also tweeted that he was running a Bitcoin node on his Twitter feed on the same day.

It’s been 14 years since we first heard about bitcoin, so we’ve been keeping an eye on its price changes. What’s more, there are now more than 8,000 cryptocurrencies in circulation. Some of them, like bitcoin and ether, are more popular, some are only in certain communities. Digitalization, decentralization and changes are fascinating and influence our daily lives more and more.

Today Bitcoin is the most expensive cryptocurrency, and its “capitalization” exceeds $390 billion.

Stay updated with FMFW.io, our features, competitions, and educational content.

This article came directly from the FMFW.io blog, found on https://fmfw-io.medium.com/happy-14th-birthday-bitcoin-312a8b91ac3f?source=rss-12ea66dd7e99——2

Related article | FMFW.io 2022: A look back at the Year’s Highlights | by FMFW.io | Dec, 2022
Previous article
Basic LBank Guide for Crypto Beginners: How to Register, Buy/Sell and Withdraw | by LBank Exchange | LBank | Jan, 2023
Next article
What is double spending and how to avoid it