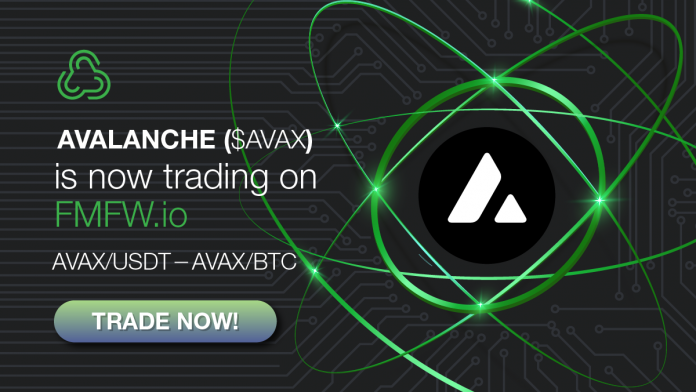 We are thrilled to announce that $AVAX token is now listed on FMFW.io and available for all users to trade!

$AVAX is the native token of Avalanche. It’s a hard-capped, scarce asset that is used to pay for fees, secure the platform through staking, and provide a basic unit of account between the multiple subnets created on Avalanche.

What is Avalanche? (AVAX)

Avalanche (AVAX) is a relatively new cryptocurrency. Despite only having sprung up in 2020, it has gained tremendous popularity as an alternative for Ethereum developers. Avalanche has become one of the larger cryptocurrencies, with a market cap of around $6.7 billion.

Avalanche describes itself as an “open, programmable smart contracts platform for decentralized applications.” Like many other decentralized protocols, Avalanche has its own token called AVAX, which is used to pay transaction fees and can be staked to secure the network.

Like Ethereum, Avalanche can power a wide variety of applications like stablecoins, DeFi protocols (lending, savings, decentralized trading), and NFTs. Avalanche is also compatible with Solidity, the programming language used by the Ethereum network, which means developers from one of the largest and most engaged communities in crypto can build on Avalanche and use it to deploy custom private or public blockchains as “subnets.” And, whereas the Bitcoin blockchain can typically process around seven transactions per second, Avalanche claims to be able to process over 4,500 transactions per second.

Who is behind Avalanche?

The three people behind Avalanche are Kevin Sekniqi, Maofan “Ted” Yin and Emin Gün Sirer. A pseudonymous group called Team Rocket first released fundamental information about the protocol in May 2018 on the InterPlanetary File System.

A group of researchers from Cornell University then developed the technology, led by Cornell professor of computer science and software engineer, Emin Gün Sirer. He was assisted by two of his doctoral students: Maofan “Ted” Yin and Kevin Sekniqi.

Avalanche’s primary network supports three built-in blockchains that handle different tasks. Here are each of the blockchains and how they work:

What’s so special about it?

According to Ava Labs, the platform can handle somewhere in the order of 4,500 transactions per second — compared to around 7 tx/sec for Bitcoin and 14 tx/sec for Ethereum. It’s also able to achieve transaction finality in under 3 seconds. This arguably makes it better suited for massively scaling decentralized applications — which would be bottlenecked on many competing platforms.

Where to buy $AVAX?

💸 You can now trade $AVAX on FMFW.io against #USDT and #Bitcoin pairs!

This article came directly from the FMFW.io blog, found on https://fmfw-io.medium.com/fmfw-io-exchange-lists-avalanche-95c02339181b?source=rss-12ea66dd7e99——2