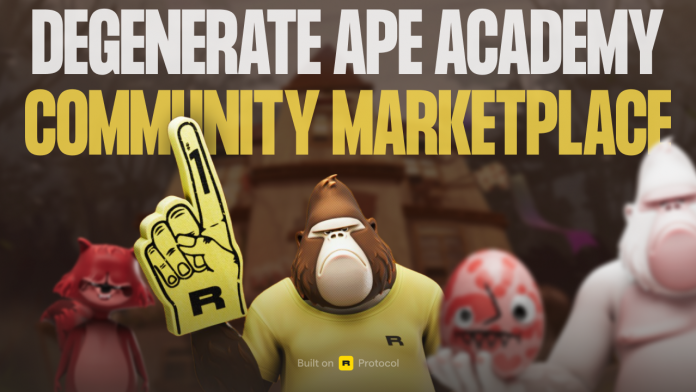 Over here at Rarible, we enjoy a night out at the yacht club as much as anyone. But at some point, even the biggest degens among us want to feel productive, get stuff done and become smarter. That’s what the academy is for.

We partnered with Degenerate Ape Academy, one of the hottest Solana PFP projects, to give the Degeniverse its very own marketplace powered by Rarible Protocol—which is live right now on the Solana blockchain!

Aping has never been so fun (and enlightening)

This is a big step for the community. To list, buy or sell your Degen Apes, you won’t have to leave the Degeniverse anymore. That creates a more seamless experience for anyone trading their NFTs:

So the more people trade the Degen Apes collections on the community marketplace, the more money goes to the community. You’re not only trading on a more fun marketplace—you’re also funding the community you just bought access to so they can build more awesome stuff for you.

Rarible Protocol is ready to serve

You might be wondering why you’re reading about DAA’s community marketplace on Rarible’s blog. That’s because it is built on Rarible Protocol, our open source NFT API.

That allows the Degen Ape Academy team (or DAOO members) to build custom UX and add any feature they want to their marketplace. This creates more room for innovation than restricting trading to third-party marketplaces and makes marketplaces composable.

While we provide the infrastructure, we don’t (and don’t want to) dictate which features and interfaces can exist—we want teams to innovate based on Rarible Protocol and customize it to their needs. Because as much as we like building awesome stuff, we’ll never know what a community needs as well as the community itself.

Now, while all that sounds awesome, customization also has an economic component: It also means the community marketplace charges custom (aka lower) fees other than third-party marketplaces (incl. Rarible.com).

The integration with Rarible Protocol also means the community marketplace aggregates listings from other marketplaces across the protocol to make sure you find the NFTs you’re looking for (or buyers for them) quickly.

And best of all, it works with every blockchain supported by Rarible: Ethereum, Polygon, Flow, Tezos and now Solana.