According to @boxmining, a group called the “Asian Dragons,” who are known for delivering aggressive multi-level marketing (MLM) campaigns, gave the presentation.

In response, Hoskinson vented his frustration and anger at the audacity of the scammers, who were bold enough to use his face and logos to substantiate their fraud.

“You work five years on something, you put your heart and soul into it, you just have a giant event with 10,000 people attend, and you see floating around Telegram, Twitter, many channels, some video, some scammers in China using my face, our company’s logo, the Cardano Foundation’s logo who have absolutely no affiliation with us.”

With that, the IOHK CEO stated that the fraudsters usually get paid cash and then disappear with no exchange in tokens or value of any sort.

“I have no recourse for that. I can’t sue them, I have no idea where they’re at, what’s going on. This happens all the time. Same with Vitalik for Ethereum. Same for Brad and XRP.”

Much to his annoyance, Hoskinson explained that there is little he or anyone else can do to counter this type of illegal activity. What’s more, since the video went viral, the fallout has had people wrongfully accusing Cardano of being complicit in defrauding the farmers.

“We have seen tonnes and tonnes of tweets, personally sent to me, sent to the Foundation, in our official Telegram groups of a particular video, over and over again, saying “why are you defrauding Chinese farmers?”” 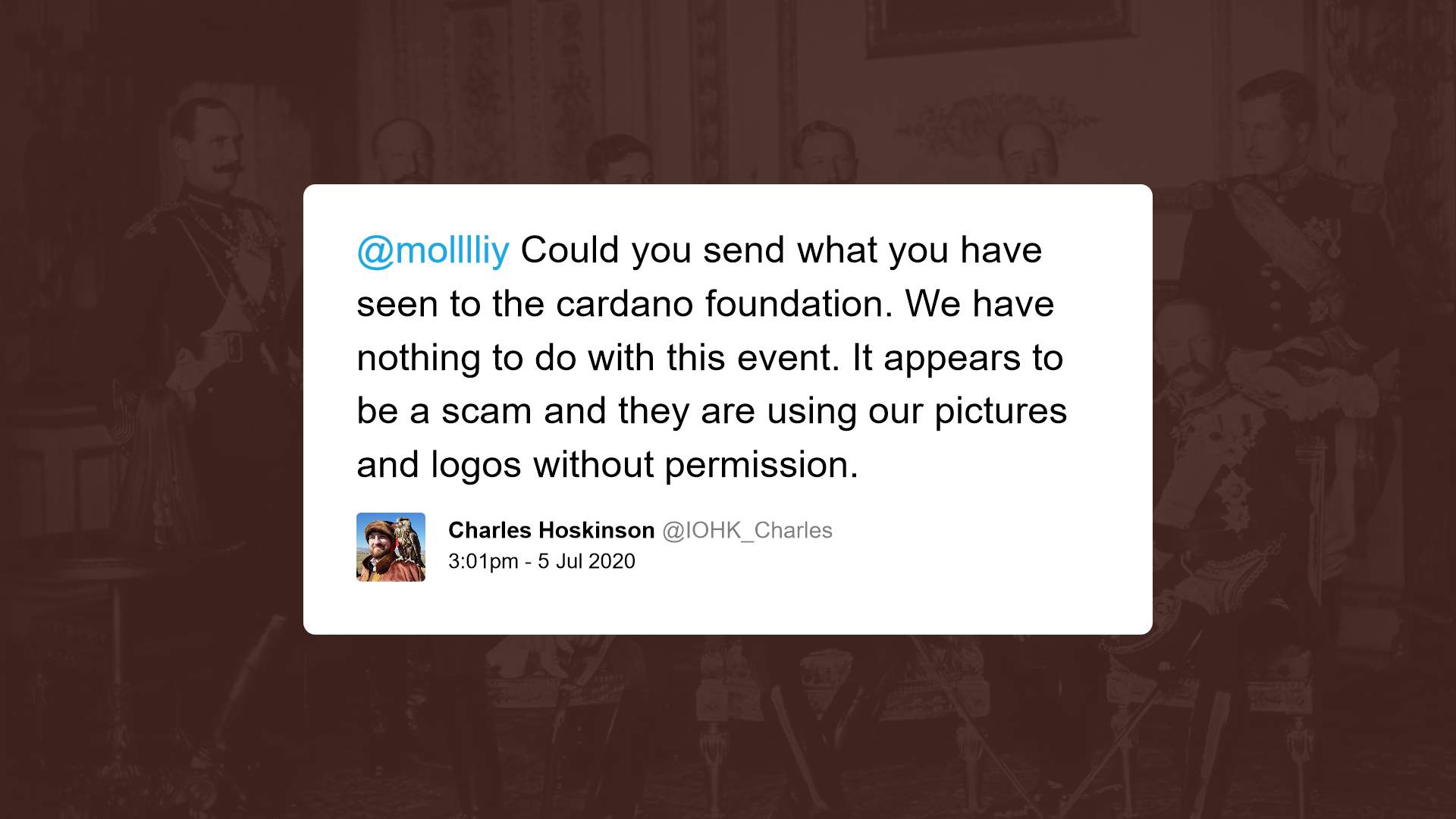 Hoskinson stated that crypto scams happen every day, especially in relation to coins that are “flavor of the month.” Although victims lose money, legitimate firms, such as Cardano, also lose out by diverting time and resources to deal with the fallout.

“Think about the mess that leaves, because when those people figure out that they’ve been defrauded they don’t go to the scammers, they come to us, and complain to us, and say why did you do this? And then we have to unravel this whole thing.”

Scamming is an Industrywide Problem in Cryptocurrency

“They don’t just hate wherever they got scammed, they say Bitcoin is a scam, Ether is a scam, that whole crypto thing is a scam. This hurts every single person in our industry when this happens.”

But part of the issue comes down to fraudsters being ahead of regulators in terms of understanding the tech and exploiting authorities that are slow to act.

“Some regulators do not understand the technology well enough to put in place suitable regulation laws. It has taken the US almost 10 years to take a stance through the IRS and SEC.”

Taking this into account, legitimizing cryptocurrency in the eyes of the masses will take more than relying on authorities to play their part.