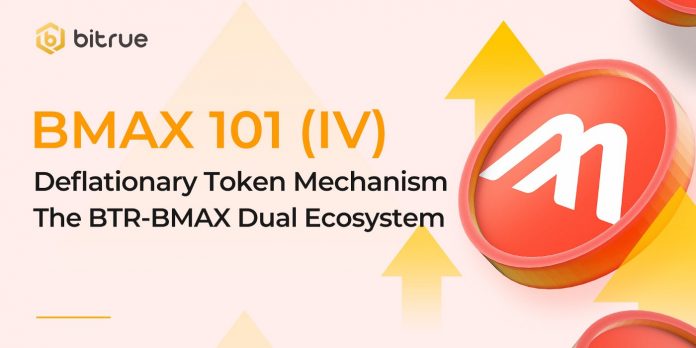 One of the most important things crypto investors do when doing their research is paying close attention to the project’s tokenomics. It could be detrimental to the value of the token in the future.

When we first launched BMAX, many of you wondered what is there to come for Bitrue’s original platform token, BTR. The biggest concern was that the introduction of BMAX will take utility away from BTR, driving it to decrease in value over time.

Fear not, the team at Bitrue has had everything carefully planned out for both of our tokens. BTR will remain the governance token of our platform, of which BTR holders can participate in our “BTR Vote” programs, and events in the future will still have BTR as reward tokens. Aside from solely being a governance token, BTR is also the base currency for many trading pairs on our exchange.

As for BMAX, the newly introduced token will function as a rewards token for yield farms at Bitrue, replacing BTR. With BMAX being used as rewards token, there will be less BTR in circulation, this in turn will make BTR much more deflationary than it is right now. Contrary to what most people thought at first glance, BMAX’s presence actually enhances BTR’s tokenomics rather than stripping it away.

To sustain BMAX’s value, BMAX is presented with a fixed amount of 5 million tokens, with regular buybacks to keep supply in circulation at minimum, making BMAX also deflationary in nature. To add to this, BMAX tokens will be available to trade for other tokens on the platform.

With the ever-expanding Bitrue community, we aim to continuously improve, adding more trading pairs and features to our platform. The introduction of a dual platform token mechanism is a rather new concept not often used by other exchanges. We believe that this is the best method to create a sustainable economic environment for both BTR and BMAX, which will be the core of our Bitrue community.

Having set up a strong foundation in our ecosystem, as more people will begin to acknowledge our expertise and dedication in building a solid cryptocurrency exchange, we are certain that the value of both BTR and BMAX will skyrocket.

We wish you all the best.

This article came directly from the Bitrue blog, found on https://bitrue.medium.com/bmax-101-deflationary-dual-ecosystem-496a5201ee4e?source=rss-c4759c9c6535——2