Bitrue Weekly Market Report : Crypto Market Back at $1Trillion Caps, Can It Hold? | by Bitrue | Jul, 2022 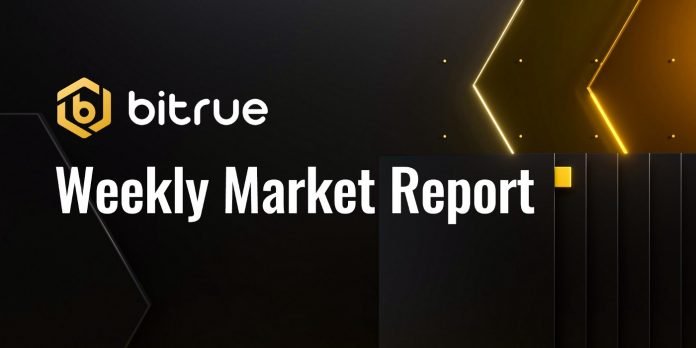 The crypto market has finally breached the $1 trillion market capitalization mark after trading mostly positive last week. This is due to some positive news headlines that came out in the beginning of the week, although it seems to have peaked in the mid-week, then underwent some retracements. Some big-cap projects that took the spotlight last week, such as Ethereum and Polygon (Matic), scored more than 30% and 40% gain respectively at the mid-week peak, while Bitcoin managed to gain a solid 8% to close out the period in the green.

While crypto seems to have taken off pretty far from its year bottom, it doesn’t go linearly with current macroeconomic conditions. With still a high inflation number, boiling geo-political tensions in Europe, rising interest rates, and a possible economic recession ahead, market participants should take precautionary action to protect their portfolio during difficult times. Defensive action such as investing in big cap projects and building up a portfolio of stablecoins and commodity-backed tokens will be necessary to keep scoring gains in an economic downturn. At the same time, always keep track of the market and be ready to catch opportunities when the first sign of a positive pivot arises.

Bitcoin is still trading inside its consolidation upward channel, with its last week peak respecting the upper channel line of the range and has retracted back since then. It is currently traded between the 100 EMA and 200 EMA lines, which are both key support levels for Bitcoin. If this level holds, it will be another green light for investors to come back into the market. Even so, investors still need to remember that currently, BTC is still in a big bearish trend. From its latest drop in June, Bitcoin found it hard to break the 50% Fibonacci retracement level, which creates another assumption that current price consolidation is just a transit, potentially followed by another market dump before the true bottom will be formed.

Ethereum has traded on a high note since last week, and the current formation is showing a more prominent bottom formation if we compare it to the market leader, Bitcoin. After the strong break that happened in the beginning of last week, the expected target has been reached during the mid-week session. As the chart shows, $1,650 is acting as a very tough resistance for ETH to break, and the $1500 level is the closest support area for ETH. Unless there is major news that comes out that causes market volatility, ETH is expected to consolidate between those two levels. Current price movement is showing an ascending flag pattern, this is a key turn level as if the sellers are coming back in, we might see a break from the lower channel line with the lowest target being around the $1250 mark.

Ethereum Merge and Its Roadmap

The Ethereum community is expecting September 19th, 2022 will be the transition date for Ethereum 2.0 or “The Merge” to happen. This is after Vitalik Buterin’s confirmation during the Ethereum Community Conference (EthCC) in Paris last week. Vitalik also added that the final Ethereum 2.0 version, which is already powered by a proof of stake consensus mechanism, will be far more scalable that the current proof-of-work network. Currently, at optimum, Ethereum is able to process at most 20 transactions per second which causes bottlenecks and forces miners to hike fees. With the new version, Ethereum throughput is expected to process up to 100,000 transactions per second at maximum capacity.

During the conference, Vitalik also said that to reach the 100,000 TPS, Ethereum will have four more development phases post-merge, which are the “Surge, Verge, Purge, and Splurge”, that will be implemented by developers in the coming years. The Surge is scheduled to happen in 2023, which will be the Ethereum on-chain scaling through Sharding. The Verge is where developers will release an enhanced version of the Merkle proofs, to optimize the network’s storage and reduce node size. The Purge, will be an upgrade that will drastically minimize hard disk size for node operators, effectively streamlining storage and reducing network congestion. Last phase, The Splurge, is where developers will do minor adjustments and upgrades primarily for optimization to ensure that Ethereum 2.0 functions as designed.

Tech Earnings and A Possibly Shaky Week for Bitcoin

Bitcoin and other digital assets were traded mostly higher during last week’s session, followed by rallies after rallies after positive headline news. These rallies bring the cryptomarket capitalization back above $1 trillion. Buying momentum seems to have found its tone back in the market. But, not to spoil the bull momentum, investors need to be mindful that the current macro-outlook is still far from neutral. Market is expecting corporate-earning reports that are coming in the following weeks that can derail the current momentum for crypto.

In theory, crypto should trade independently from mainstream financial markets, but recent price movements have shown themselves to be largely correlated with stocks, especially tech stocks. Taking an example for the recent market 5% plunge after news came out that stated Tesla had sold 75% of its Bitcoin holdings to strengthen its liquidity for expected “rainy days” ahead. Other tech companies such as SNAP also said that it wouldn’t provide forecasts for its performance in the coming quarters. This has raised hackles of investors that are already fearful of an economic slowdown. Big tech earnings have the ability to drag not only the equity market, but also the crypto market down with it, this is due the fact that markets tend to severely punish richly valued tech stocks at the first sign of trouble. So any significant changes in investor sentiment from the results at major tech companies would likely bleed into the crypto space. In the following weeks, earning from lead tech companies such as Apple, Alphabet, Amazon, and Microsoft, can bring significant volatility to Bitcoin.

This article came directly from the Bitrue blog, found on https://bitrue.medium.com/bitrue-weekly-market-report-crypto-market-back-at-1trillion-caps-can-it-hold-55127b237a5e?source=rss-c4759c9c6535——2