Bitrue Weekly Market Report: Bitcoin in a Trading Range: Calm before the Storm? | by Bitrue | Jul, 2022 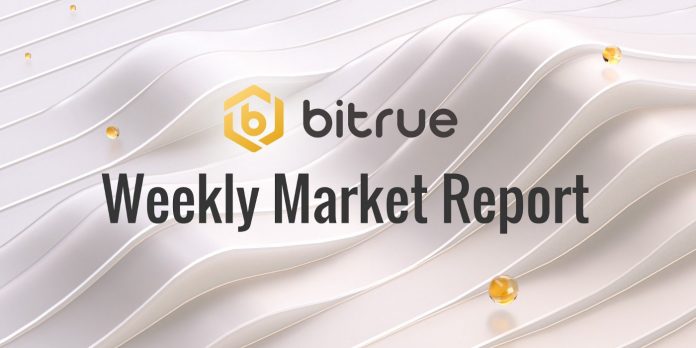 Current commodity markets are showing that prices are slowly but surely coming down from their recent peak. Although the current price level is still far off from the pre-Covid level, the Fed is expected to raise rates in the near future to slow down the economy even more. Weaker demand in commodities such as food and energy, which comprise about 22% of CPI, will significantly bring inflation down. Tension from the Russia-Ukraine war and disturbed supply lines resulting from China’s lockdowns are expected to get better in the coming months which hopefully will bring prices to where they were pre-Covid.

With the aggressive move by the Fed, the US Dollar is seeing significant appreciation against other currencies. For instance, the current EUR/USD exchange rate of 1.0145 is the weakest level for the Euro since November 2002. A strong currency will help the central bank to boost asset value and reduce their debt portion, and hence spruce their overall balance sheet. But too strong of a currency will kill demand for local products and that can negatively impact the overall economy in the long run. Other countries with massive resources, such as China, are capable of producing the same product at a lower price, and can easily dominate the world market. US products will find it hard to compete with products imported from China. If this trend continues, the US may potentially become an import-dependent country and that’s not a strong backbone for their economy.

Mt. Gox, one of the first Bitcoin exchanges based in Japan, is reportedly planning to distribute another 140,000 Bitcoin to its creditors. According to a July 6th letter by the business’ Japanese bankruptcy trustee, they held a trove of 141,686 Bitcoin, as well as cash and Bitcoin Cash. Although it won’t be a significant fraction of total Bitcoin trading volume, the selling action by the creditors that want to cash out might push BTC prices down. The decline might spook some other investors which will result in a possible further drop. Mt. Gox previously suspended all trading activity and went offline in February 2014 after losing about 850,000 Bitcoin. The case is still under ongoing investigation but it’s previously been asserted that hacker activity may be the main cause of the situation.

Bitcoin is trading in an ascending range between $20,000 and $24,000. Although the price has moved back and forth around the $20k level during the past weeks, we are seeing BTC finally find a support level that looks unlikely to be breached. There is a possibility that BTC is going sideways with 3–5% daily percentage change in the next few days and possibly weeks. Any big news catalyst will move BTC out of that range and likely will be the next trend for Bitcoin.

In lock-stop with Bitcoin, Ethereum is also showing a trading range between the $1,000 and $1,400 levels. There is a local-inverse-Quasimodo pattern that respects the $1,000 psychological support. As long as it stays above $1,000, ETH can be a good asset to keep. We are seeing that overall crypto markets are in search of the next trend movement. The longer that we stay at this level, the higher the chance that we may have reached the bottom

This article came directly from the Bitrue blog, found on https://bitrue.medium.com/bitrue-weekly-market-report-bitcoin-in-a-trading-range-calm-before-the-storm-47012691119a?source=rss-c4759c9c6535——2