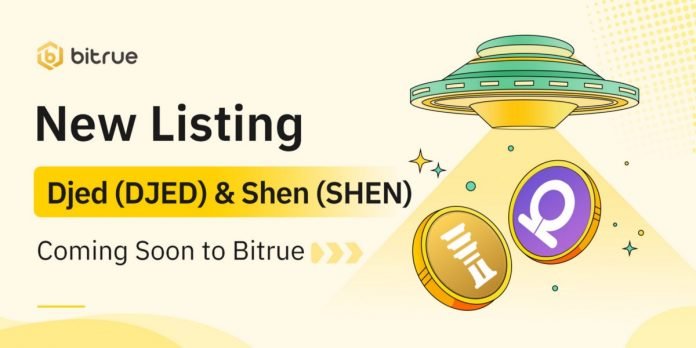 24th January 2023 — Bitrue will soon be officially listing $DJED, Cardano’s decentralized crypto-collateralized stablecoin, powered by COTI. As a long-term exchange partner of Cardano, Bitrue has always maintained a strong relationship with Cardano since 2018. Bitrue’s extended support towards Cardano can be seen through its support of ADA as a base pair and its support of ADA’s decentralization through staking with community stake pools. In addition, Bitrue has also shown support by launching ADA leverage trading and staking on Bitrue’s platform. Being the first crypto exchange to list $DJED and $SHEN, Bitrue continues to be one of the foremost partners of the Cardano community.

Stablecoins are an important facet of cryptocurrency, often seen as a way to ensure stability during periods of market volatility. Stablecoins are cryptocurrencies whose value is pegged against another currency or asset such as the US dollar or Gold. Amongst the different stablecoin solutions, algorithmic stablecoins have been an emergent solution in the discussion of the future of stablecoins. An algorithmic stablecoin is a unique type of cryptocurrency relying on two tokens–a stablecoin and an algorithmically linked cryptocurrency that governs the relationship between them. The $DJED token employs a unique solution in which the native stablecoin is collateralized by the protocol’s reserve token, $SHEN, which is in turn backed by $ADA. $ADA holders can choose to provide collateralization for $DJED by purchasing $SHEN tokens, which in return will generate yield for them.

Unlike previous models of stablecoins, $DJED is overcollateralized 4 to 8 times of its value, in order to create a large margin of safety. $SHEN guarantees the collateralization rate of the protocol in order to ensure there’s enough $ADA in the pool, even in cases where $ADA’s value fluctuates.

The official listing announcement would be out in the near future. Bitrue will also be rolling out $DJED and $SHEN staking, and other campaigns as well, so please stay tuned!

This article came directly from the Bitrue blog, found on https://bitrue.medium.com/bitrue-soon-to-be-first-exchange-to-list-djed-and-shen-271f739a846f?source=rss-c4759c9c6535——2