Bitrue Invites you to Pick Your Favorite Layer 1 Project! | by Bitrue | Dec, 2022 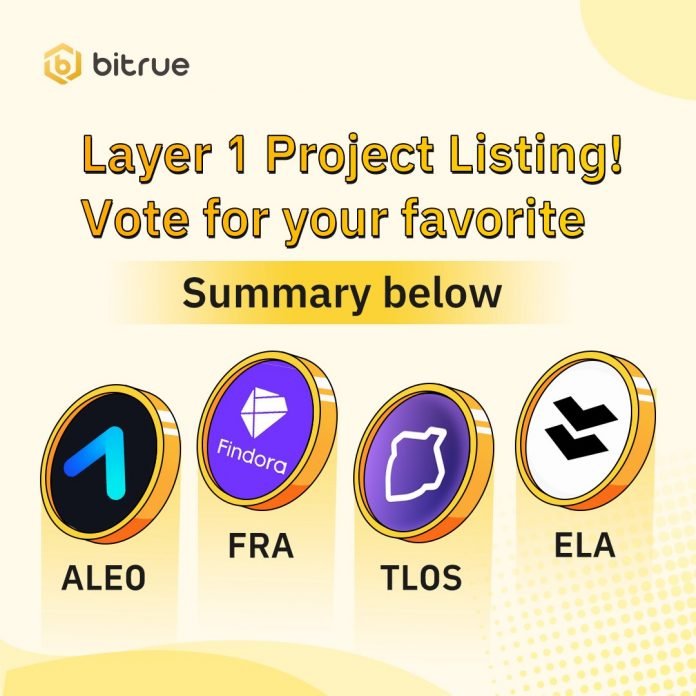 Blockchain infrastructure is, without doubt, the most important component of the crypto space. dApps are decentralized because they are built on blockchain ledgers, discarding the need for a centralized server. Because of their significant role in the ecosystem, blockchain project tokens are known to perform well over the long run. Imagine if you had invested in Solana in early 2020, how much would you have made in a crypto bull run? However, with the abundance of blockchain projects flocking the space, it has become increasingly harder to differentiate good projects from bad ones.

Luckily for our Bitruers, the team at Bitrue is committed to providing you with the best selection of assets, from early stage projects that could 100x to bluechip cryptos. We have selected 4 blockchain projects that we are considering listing on the exchange, and we would like to invite you to join in and help us decide!

Below is a quick summary of the 4 projects we have shortlisted today:

Product: Aleo is another blockchain project that uses the current utmost trending privacy technology — zero-knowledge proof cryptography. If you have been in the crypto space for a while now, chances are you might have heard of this term. If you don’t, zero-knowledge proof is an encryption technology that allows nodes to verify their possession of information without actually sharing the information to the receiving party. At a glance, the technology might seem simple, but if done correctly, it could potentially be one of the biggest developments in the space, as it allows blockchain users to maintain their privacy without the need for a third-party intermediary. Think of using DeFi without everyone knowing your wallet address’ balance, but they can still verify that you’re being honest with your transactions.

Zero-knowledge proofs have been all the hype these days, and we could not deny that there are dozens of projects out there trying to implement zk-Proofs. What makes Aleo stand out is that it emerges as a complete package, with its industry-leading infrastructure and tooling for writing zero-knowledge applications.

Other than the mainnet and the block explorer itself, Aleo provides 3 additional features, including:

1. Leo: It’s native programming language that is open-source and can be utilized by anyone to start building dApps.

Tokenomics: The ALEO token is currently trading at US$40.2. 55% of its total supply will be allocated to public sales after 5 years since its initial release. The value of the token is derived from the chain itself, as users are required to participate in the blockchain as validators or miners. Transaction fees will also be paid in ALEO tokens. Some believe that the price of this token will mirror the total demand of retail users for zero-disclosure computation.

Fundings & Partnerships: Aleo is backed by a list of top venture capitals in the industry, including a16z, Coinbase Ventures, Polychain Capital, Galaxy Digital, Slow Ventures, Variant Fund, Samsung NEXT, SoftBank, and several other notable investors. They have accumulated a whopping total funding of approximately US$290M through three funding rounds. Aleo also partners with other projects in the space, such as Forte, a blockchain-based gaming company, and conducted a “Zero Knowledge Base Camp” with Outlier Ventures.

Product: Findora is a Public blockchain based on zero-knowledge proofs and multi-party computation that allows developers to build privacy-featured applications. The blockchain features a decentralized network of global validators. In addition, Findora is uniquely situated to be combined to create programmable privacy layer and cater to any layer 1 blockchain such as Ethereum. Its distinctive cryptographic mechanism ensures the blockchain has an adaptive security, accountability and recovery and proofs of knowledge to reduce the communication complexity in governance.

Its token, (FRA) implements a model that mainly acts as a non-refundable functional utility token which will be used as an economic incentive as well as allow users to contribute and maintain the ecosystem on the Findora platform. This allows users to vote on governance on the FIndora Blockchain.Its token can be used for different real-world applications such as smart investment funds that utilize smart contracts to oversee the transparency of traditional investments or Private investments to provide improved proof of funds and more intermediate liquidity.

Tokenomics: FRA token is used for governance activities, such as determining consensus seats in the voting proposal. In addition, Incentive staking of FRA can be done by validators along with transaction fees associated with the token.

Product: Telos is a project that focuses on solving current blockchain issues such as high gas fees, low transaction speeds, scalability and governance. It is a third-generation smart contract platform that offers compatibility with Solidity, Vyper and Native C++ smart contracts with supporting over 100+ DApps.

One of Telos’ solutions is for accounts to be limited to only holding 40,000 TLOS, resulting in no account having a significant holding. A solution that could prevent 51% attack and from “Whales” hoarding, making security a priority for its users.

A prominent feature of Telos is for users to have no gas fee in using TLOS while having insignificant gas fees in their EVM chain. Moreover, Telos boasts its fast transaction speed with over 10,000 TPS with a new block produced every 0.5 seconds. Having an extremely fast blockchain is an advantage as it gives bots little time to scan for valuable trades, therefore, outrunning Front-Running. Furthermore, Telos has a fixed-rate gas fee so that no users can jump ahead, and every block producer must process transactions on a first-in, first-out basis.

An advantage of Telos is its ability to become an ESG blockchain. Applying Environmental, Social, and Governance in their investment and business practices; therefore, Telos users won’t need to worry about being environmentally unfriendly.

Tokenomics: With a max supply of 355 million TLOS and a circulating supply of around 243 million, token holders can enjoy a strong sense of resource ownership, governance and financial use. To stop TLOS from supply inflation, the community has decided to use the Exchange Token Reserve Fund to pay for network operations.

VC backings & partners: Telos has been funded in two series collecting over $110M with investors such as ConsenSys Ventures and 10 other venture capitals

The last project today is, without doubt, a noteworthy candidate that you must not miss.

Product: Look through Elastos’ website, and readers will find one key philosophy that Elastos strongly emphasizes when building their product — creating a decentralized internet. The team at Elastos believes in an open-source internet where everyone owns and controls their data. They refer to their platform as the Elastos SmartWeb, and as the name suggests, Elastos is another ambitious blockchain project that comes in as a complete package, instead of only offering a blockchain ledger, which is already a big deal alone.

Elastos’ founder, Rong Chen, quitted his job at Microsoft when he realized how the internet has become a data harvesting machine for the big corporations, and that data will soon be, if not already is, one of the most valuable resources on earth. The whitepaper explicitly states that “ While Bitcoin solved the double spending problem for a single digital currency, Elastos will solve the double spending problem for all forms of data and digital assets.”

As for the mainnet itself, Elastos opts for the more traditional Proof-of-Work consensus mechanism. It uses the SHA256, the same algorithm used by the Bitcoin network. Although proof-of-stake has been the latest trend with Ethereum merging into a PoS chain, there are still many people who advocate for a PoW consensus, believing it to be the more decentralized solution. With the ongoing heated debate about the two most popular consensus mechanisms, and the rapidly evolving industry, there is no guarantee as to whether PoW or PoS will emerge victorious as the new industry standard. However, as an investor, there is no harm in diversifying your basket.

Whereas the mainchain focuses on network security and decentralization, Elastos expects its scalability to be derived from layer 2 scaling solutions such as sidechains.

Aside from the mainnet, Elastos comes in with a Sidechain Architecture, Peer-to-Peer Networking, Decentralized Identity, Community Governance, and Decentralized Storage.

The official Elastos app is downloadable on mobile devices, and comes with an automatic decentralized identity (DID) generation, and an RPC wallet that can function as both a swap and a bridge.

Tokenomics: ELA will be both the utility and governance token of the Elastos chain. It is currently trading at US$1.14 at the time this article is written. There are many reasons why users should hold ELA tokens, given the project’s extensive nature, including processing peer-to-peer payments, storing info on the Decentralized Chain (EID), and executing smart contracts. Fun fact, the minimum unit of ELA is named Satoshi ELA (Sela), like how Satoshi is to BTC.

Kosmos Ventures, Somesing, TrustVerse, Youbi Capital. However, it mainly receives its funding from its ICO, which accumulated approximately US$94M. As for partnerships, Elastos has partnered with other players in the industry, such as Telos, BIT.GAME, and Hashworld.

This article came directly from the Bitrue blog, found on https://bitrue.medium.com/bitrue-invites-you-to-pick-your-favorite-layer-1-project-a3c7d1bfcfed?source=rss-c4759c9c6535——2