Bitrue Invites you to Pick Your Favorite GameFi Project! | by Bitrue | Dec, 2022 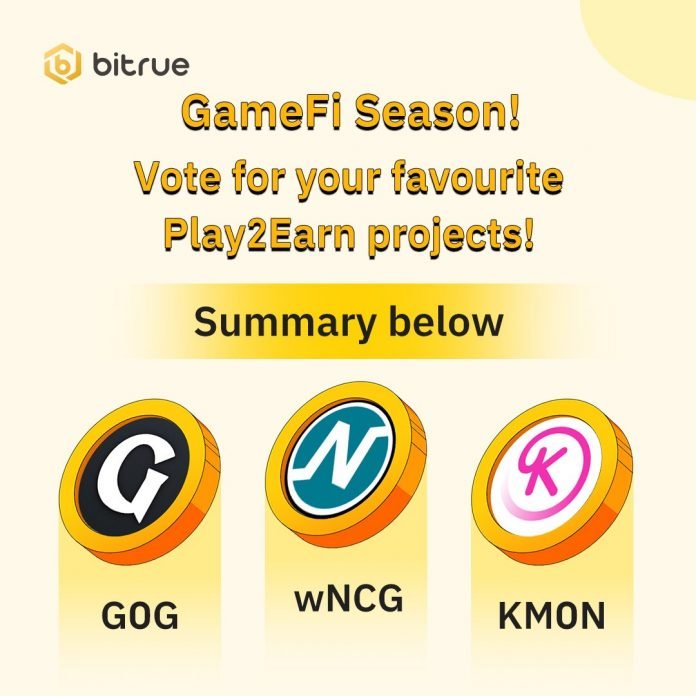 What is better than playing your favorite games with friends while earning some bucks along the way? Bitrue is here with some more GameFi tokens for you to choose from! Let’s hop on:

Guild of Guardians is a mobile fantasy RPG game with free roam in different dungeons, defeating different types of monsters and bosses. Players will assemble a team of heroes while going through different dungeons to collect various resources and earn experience. These resources will be used to craft items and summon heroes that can be traded and earn real money.

Guild of Guardians encourages the players to join a community to be able to earn more GOG and seasonal prizes for ranking up in the leaderboard. As the forerunners of cryptocurrencies, communities that contribute to the growth of the Guild of Guardians’ ecosystem will receive rewards. Gamers would be rewarded by the amount of Playtime, Character progression, Account history, and Daily Quests completion.

There are several types of NFTs that could be traded by players, such as; Heroes, Avatars, Pets, and Crafting Items, with several items already available to be traded. Heroes have various different categories from element to faction to classes making a unique ensemble for players fighting different classes of monsters.

For the game itself, the game is developed based on Ubisoft Engine and has been released for Alpha Testnet in Q4 of 2022. Beta mainnet will officially be live in the first half of 2023, and mainnet will be available at the end of 2023 with additional features. Guild of Guardians would be released on both Android and IOS; players do not have to buy Hero NFTs to be able to play.

Several token utilities include minting NFTs such as merging heroes, crafting items, and hero ascension, and for every token used, it will be put back in the rewards pool. Buying and selling NFTs would also use GOG as the primary token.

VC Backings & Partners: GOG has raised over $18.8 million being funded by 16 different venture capital funds VCs such as Coinbase, Galaxy Digital, and D64 are on board the investment. Several partners also include Yield Guild Games, NRG, and ImmutableX.

Product: Nine Chronicles is a fantasy MMORPG (Massively Multiplayer Online Role Playing Game) that is fully open source and built on the Libplanet by Planetarium blockchain, which is a specialized blockchain made for game development. As a matter of fact, the Nine Chronicles team is also from Planetarium Labs, the company behind the blockchain itself. Nine Chronicles’ gameplay has a turn-based player vs. player (PvP) mechanism, similar to its successful GameFi predecessor, Axie Infinity, but it also boasts a player versus environment (PvE) game mechanics.

What sets Nine Chronicles apart is its unique anime-style character animations and its fantasy smooth-moving graphics. The main lore or core story of the game is called a “Campaign”, players are said to complete a “Campaign” once they finish all stages of battles in nine maps/worlds. There are 50 stages of battle games that players must accomplish in each of the nine worlds, making a total of 450 PvE battles to go through. There is a nostalgic element to this game, in which at each of the 50th level, players will have to battle a “Boss” character, that could resemble the biggest and scariest monster in that world, reminiscent of several web2 games in the early 2000s. If players wish to compete against real-life friends or strangers, they can do so in the “Arena” gameplay.

In both PvP and PvE game modes, players can earn $NCG token rewards when they win, and these tokens could be traded for more in-game items, such as equipment, consumables, materials, costumes, and titles. Aside from purchasing these items from the store, players can also craft and upgrade their belongings using the $NCG token, enhancing their gameplay experience.

Another interesting fact worth mentioning is that the game is downloadable on desktop. It is not a web-based game, presumably contributing to making the whole gaming experience more seamless.

In addition to all of the in-game facilities, the Nine Chronicles team is active in creating events and content for their community, including a Halloween Seasonal Event, and community voting.

Lastly, and most importantly, the game is FREE TO PLAY. Meaning that players would not need to purchase an NFT or the token to be able to enjoy the game.

Tokenomics: $NCG token is both a utility and rewards token that can be obtained by simply playing the game. To increase the finance aspect of the game, players can stake their $NCG token to earn yields. The yields are derived from a portion of the revenue generated from their NFT sales.

Since the original NCG token is on the Planetarium chain, the team decided to have a wrapped version, the wNCG, on the Ethereum chain, so that it could be publicly traded on crypto exchanges.

NCG tokens have a fixed cap of 1B NCG, reducing the inflationary pressure from the supply side.

Fundings & Partnerships: Nine Chronicles is backed by two of the biggest venture capitals in the GameFi space, Animoca Brands and Binance Labs. Other than that, several notable venture capitals such as Sfermion, IDEO Ventures, #Hashed, and Hypersphere also participated in its funding, followed by 11 other venture capitals. The funding round raised US$32M for the team, while their ICO round raised another US$140k.

Nine Chronicles has partnered with another GameFi project, Revomon, and other blockchain protocols, including PathDAO and Double Protocol, since its inception.

Product: Kryptomon is a game that utilizes digital collectible pets built on the BSC blockchain that can be bought using dedicated BEP-20 token KMON. The game features different characteristics of these collectible pets using a unique but partially mutable genetic code made up of 38 different parameters that will determine everything from its visual appearance to its prowess in combat. In addition, the game utilizes a sort of Tamagotchi mechanism which decides the love of each pet and temporarily boosts parameters. This mechanism covers different scales such as feeding, health and caring scales. Kryptomon is uniquely situated with different features of its pets, mainly described as Parameters and Genes.

Parameters are described as :

Genes are described as :

The game follows a Play To Earn model that will allow players to earn KMON without the need for any further spending on the player’s part. These rewards are financed by the purchases of ‘Loot Boxes’ from challenges, quests, and various other in-game actions that will require the use of KMON.

Fundings & Partnerships: Kryptomon had several funding, mainly through venture capital seed funding in the amount of $10M. Several venture funding include names such as Homeward ventures, Playstudios and NFX.

This article came directly from the Bitrue blog, found on https://bitrue.medium.com/bitrue-invites-you-to-pick-your-favorite-gamefi-project-dd104f7bc53b?source=rss-c4759c9c6535——2