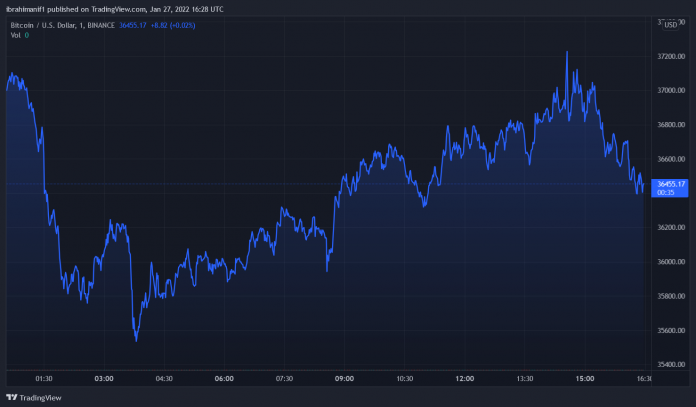 The price of bitcoin has dropped after the Federal Reserve said that it will likely raise interest rates in March.

Bitcoin lost its yesterday’s gain, now trading at $36k at press time. However, Fed Chairman Jerome Powell stated during a press conference that there is still a lot of uncertainty, including how many interest rate hikes will occur in 2022 and how rapidly they would climb.

The Fed is winding down its asset-purchasing program at the time of this decision. Monetary stimulus has been a substantial source of market support over the last year, contributing to the strength of both equities and the crypto market.

The Fed indicated that it would carry out a previously announced taper of bond purchases and that rates would be raised “soon.” In recent months, traders’ enthusiasm for cryptocurrencies has waned due to expectations of higher rates and less liquidity. That hasn’t dampened Cathie Wood’s ARK Invest’s optimism, which forecast on Tuesday that Bitcoin’s price will reach $1 million by 2030.

All of this occurs while the central bank tries to rein in inflation, and some analysts believe the cost-of-living situation will worsen before it improves.

As a result, the Fed remains committed to closing the money taps and ending the massive stimulus measures enacted during the coronavirus outbreak. Powell stated,

“This is going to be a year in which we move steadily away from the very highly accommodative monetary policy we put in place to deal with the economic effects of the pandemic.”

It’s worth noting that when it comes to boosting interest rates, the Fed will have to strike a balance. If they rise too quickly, employment levels could be impacted, and the current economic recovery could be jeopardized.
The announcement elicited a wide range of reactions. BTC is currently trading at $36,421, down 3.76% on the day and well below the $38,825 highs witnessed in the days leading up to his statements. On Thursday, the stock markets also dipped somewhat.

Impact On Bitcoin And Crypto Market

Since the Federal Reserve’s early November 2021 meeting, when the central bank stated that it will begin tapering its bond purchases, eliminating financial system stimulus, Bitcoin’s price has been under severe pressure. In November, the cryptocurrency reached a high of about $69,000.

Government bonds may be preferred by less cautious investors since they are less risky.

If the change in monetary policy has a long-term negative influence on the stock market, major cryptocurrencies like BTC and ETH may suffer as well.

Bitcoin break line is around $30,000, which it successfully defended last July, and any drop below this psychologically significant price threshold might have serious consequences.