As predicted, a big movement came for bitcoin following a week of consolidation. Analysts have been mixed all week but those that leaned towards bearish were right as the king of crypto plunged back into four figures a few hours ago.

A huge red candle resulted in a dump of over 9% for BTC a few hours ago. The pennant that was identified by analysts yesterday reached its conclusion and what appeared to be an upside breakout actually turned into a massive slide.

From an intraday high of $10,270, bitcoin dumped almost $700 in less than an hour. BTC found temporary support at around $9,650 before losses started to accelerate again an hour or so ago. The next slide went even deeper, bottoming out at around $9,330 according to Tradingview.com 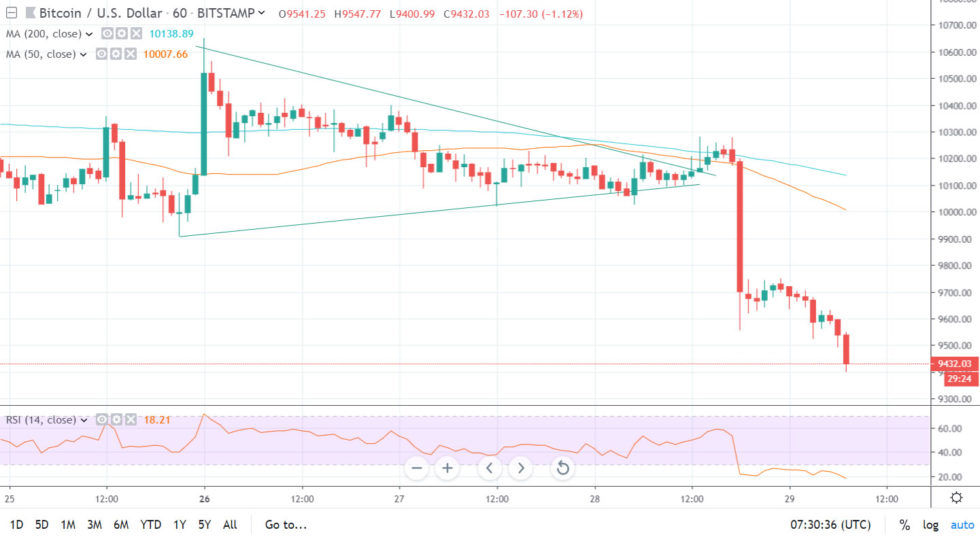 The next support level lies at the previous lowest point which is around $9,000. If that cannot hold, BTC will fall back into the $8k region as many have predicted. Trader and analyst ‘CryptoFibonacci’ has been looking at…

Ethereum Likely to Tag $2,000 in Near-Term as Rally Turns Parabolic

Ethereum Likely to Tag $2,000 in Near-Term as Rally Turns Parabolic

Ethereum saw a meteoric rally yesterday that allowed it to post some massive gains, with bulls taking full control as they sent it to...

Ethereum only just broke its former all-time high, while Bitcoin left took that record back in 2020. However, an investment in the top-ranked altcoin...