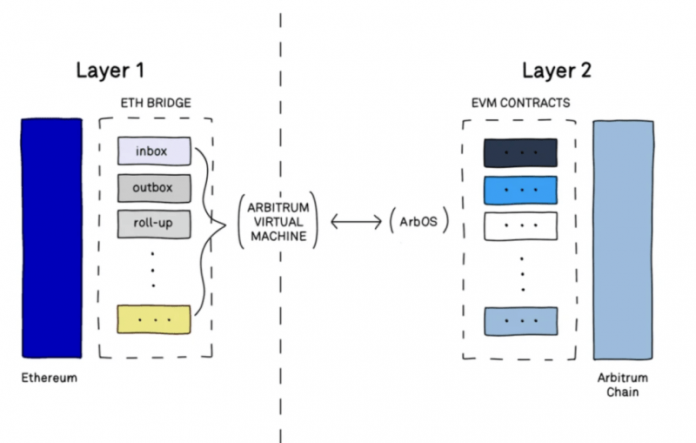 From 2020 to now, many public blockchains such BSC, Solana, Polkadot, and Avalanche raced to take over ETH’s users and market. Their advantages on low gas fee and quick transaction time made ETH eager to release effective Layer2 program to expand the capacity. Since Arbitrum was released, its ecosystem grew up rapidly and already owned many mature and popular featured projects on different race tracks. The appearance of Arbitrum was a redemption of ETH2.0 to some extent. By lowering cost and increasing efficiency, it provided power to establish sustainable fundentmental equipment and DApp with greater throughout capacity effectively and safely.

Arbitrum is an ETH Layer 2 scaling solution created by the Offchain Labs team based on Optimistic Rollup technology. Offchain Labs was co-founded by Ed Felten, a former White House technology official during Obama’s tenure and a longtime professor at Princeton University, and the other two co-founders, Steven Goldfeder and Harry Kalodner. They officially founded Offchain Labs when they were at Princeton University. Ed Felten describes Arbitrum Rollup this way: “Arbitrum Rollup is an off-chain agreement governed by the online Ethereum contract.” Offchain Labs completed a $3.7 million seed round financing led by Pantera Capital in March 2019 and a $20 million Series A funding round in April 2020. In August of the same year, it finished another $120 million financing with a valuation of $1.2 billion. This round of financing was led by Lightspeed Venture Partners, accompanied by some other investment institutions including Polychain Capital, Ribbit Capital, Redpoint Ventures, Pantera Capital, Alameda Research, and Mark Cuban.

Arbitrum is also a scheme of Layer2 Rollup. Similar to Optimism, the finality of the state is guaranteed by the challenge strategy. Optimism’s challenge method is to simulate a transaction completely in Layer 1 and determine whether the status of the transaction is correct after it was executed. This method needs to simulate the execution environment of EVM in Layer1, which is relatively complicated. The challenge of Arbitrum is relatively easy. It performs an operation (AVM) on Layer 1 and determines whether the operation was performed right. Arbitrum officially mentioned that the entire challenge requires about 500 bytes of data and about 9w of gas. To complete this convenient challenge method, Arbitrum realized the AVM virtual machine and the execution of the EVM in the AVM virtual machine. The advantage of the AVM virtual machine is that the underlying structure facilitates the proof of state.

The working principle of Arbitrum is actually easy to understand. In short, Arbitrum packages many transactions or events together, settles them on a proprietary sidechain, and then reports the transaction data to the ETH main chain. Arbitrum employed a technique called Optimistic Rollup, which can compress the data of transactions in bloakchain and rolled up (aggregated) them into a single event. The advantage of this is that the blockchain only needs to process a single transaction without having to confirm every transaction contained in the Rollup, which not only saves time, but also lowers transaction gas fees. The feature of Arbitrum is that it’s cheap and fast and transmits all transaction information back to the ETH main chain.

2. The Structure of Arbitrum

As a fully EVM compliant strategy, Arbiteum has inherent advantages and is even more flexible than ETH in some development aspects. For each network, developers will be the first users, and an EVM-compatible network will greatly accelerate the influx of developers and the construction of infrastructure.

According to Arbitrum’s ecological portal, we can see that basically all mainstream wallets or asset management tools are integrated with the Arbitrum network. For users, they can use their commonly used wallets to directly interact with various applications on Arbitrum.

For developers, the commonly used Ethereum development tools and suites (Web3.js, Truffle, Hardhat, Infura, Moralis) all support the Arbitrum network. Developers can use these tools normally, and the development process is basically no difference in that of ETH. In order to enrich and complete the functions of the decentralized application, The Graph and Chainlink are also integral parts of the development, and both support the Arbitrum network. With these basic tools, developers, as the first users of Arbitrum, can switch to Arbitrum’s ecological construction almost seamlessly, and can obtain the same development experience as the Ethereum network, developing fully functional decentralized application.

Other than wallets, Arbitrum’s user tools include Arbiscan blockchain browser, Nansen, Token Multisender (which can perform NFT transfers in batches), and Gnosis Safe (multi-signature wallet, which can be used as a team’s shared wallet or personal multi-device wallet management tool). These tools not only ensure the needs of basic users to view transaction information, but also provide data analysis and special interaction functions for some users, letting the use of Arbitrum can be expanded.

Arbitrum is not only the largest Layer 2 network, but also the third largest Ethereum cross-chain network. Compared with other Ethereum network expansion solutions, Arbitrum can continue to lead the Layer 2 and cross-chain fields. It has the following advantages.

According to incomplete statistics, the Arbitrum ecological portal lists about 200 projects, which cover categories such as wallets, exchanges, DeFi, NFTs, DAOs, and cross-chain bridges. Currently, from the perspective of participating entrances, there are about 60 cross-chain projects that support deposits and withdrawals, wallets, exchanges, and bridges. Nearly 40 DeFi applications in statistics are mainly distributed in derivatives, AMM and revenue optimization aspects. In addition, in terms of NFTs, TreasureDAO plays a dominant role in the 3 NFT markets. The NFT series in Bridgeworld, a metaverse game of TreasureDAO, is relatively popular, while most other NFT projects lack lasting popularity. There are also more than 30 tools, infrastructure and node providers.

Among the 56 projects included in The Arbitrum Odyssey Ecological Adoption Plan, Yield Protocol, Hashflow, Aboard Exchange, tofuNFT, Uniswap, ApeX, 1inch, Yin Finance, DODO, Swapr, TreasureDAO, BattleFly, Ideamarket, and SushiSwap were selected after community voting. Arbitrum will launch a two-month program in conjunction with Project Galaxy to attract users to experience these projects. Users who collect at least 12 of the 15 NFTs will be eligible for the final arbi-verse NFT designed by crypto artists Ratwell and Sugoi.

According to the real-time news of DefiLlama, the total locked volume of Arbitrum is 1.07 billion US dollars, and there are 5 projects with a locked volume of more than 100 million US dollars, which were SushiSwap, GMX, Curve, dForce, and Stargate. Among them, SushiSwap accounted for more than 20% of the total locked volume, reaching $267 million. GMX ranked second with $168 million and Curve ranked third with $142 million. (2022.06.14)

In summery, Arbitrum is the hottest one among the current Layer2 projects. According to the official news, more than 300 projects have been listed on Arbitrum One (the main network developed by Arbitrum based on its own technology) since the release, including the top projects on the ETH mainnet such as Uniswap, Sushiswap, MCDEX, DODO, and Biconomy, and infrastructure providers commonly used by ETH such as The Graph and Etherscan. At present, more than 200,000 transactions have been conducted on the Arbitrum One mainnet, and a total of more than 800 account addresses and 600 contracts have been deployed. The reason why the launch of Arbitrum could cause such great enthusiasm in the industry is not that it has more than 250 developers connected to the network at the beginning of its launch, but the urgent performance demand of the blockchain industry for the blockchain public chain, forcing developers who are committed to the implementation of blockchain concepts have to “succumb” to higher-performance public chains.

In general, Arbitrum has not yet entered the real mature application period, and the project team is developing and deploying infrastructure and projects such as cross-chain bridges. However, the innovative design of the mechanism has brought unique advantages to Arbitrum, and the presence of top Defi projects such as Uniswap has also proved the potential and value of this Layer 2 solution. In addition, under the “pressure” of Optimism’s release of airdrops, Arbitrum, which is firmly sitting on the Layer 2 dragon chair, may launch its own ecological token to improve the ecology and motivate developers. Under the general trend that airdrops can also get rich, the next wave of fanatic airdrops may be coming soon. In the context of Optimism’s announcement of airdrops, Arbitrum still has a very good opportunity, and the sooner it participates, the greater the chance.

This article came directly from the Digifinex blog, found on https://blog.digifinex.com/2022/06/29/layer2-what-is-arbitrum/