All You Need to Know About Crypto Staking 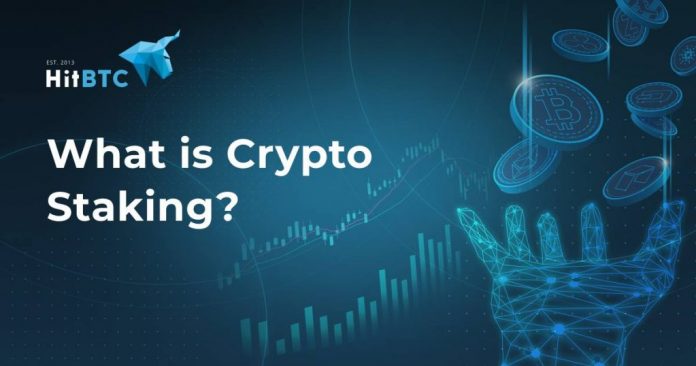 This article came directly from HitBTC.

Holding assets is not the only passive income opportunity in the world of crypto. Blockchains powered by the Proof of Stake algorithms and their alterations, allow users to get additional profit via staking. To stake a coin, you’ll need to store it in a wallet enabling you to do so or simply buy those coins on an exchange that supports staking.

To better understand the concept of staking, let’s start with consensus algorithms.

Proof of Stake is a common consensus algorithm that challenges Bitcoin’s famous Proof of Work model. Instead of using power-based miners’ incitement, stakeholders determine which node will mine the next block depending on how many tokens they ‘freeze’ for the purpose of staking.

One of the most popular PoS variations is Delegated Proof of Stake (DPoS). DPoS, initially introduced by EOS creators, suggests that token holders can get rewards for choosing validators who will verify and add new blocks.

In fact, the original PoS is hardly the most in-demand protocol. Its successors, such as Leased Proof of Stake, Proof of Space or Storage, and others, seem to gain more traction.

Trending blockchains and tokens powered by the PoS or PoS-inspired protocols include Solana, Cardano, Tezos, Waves, QTUM, OMG, and more.

The underlying concept of blockchain doesn’t tolerate bank-alike third parties to verify transactions, so users do that instead. PoS enables coin holders to lock a certain amount of assets in their wallets to help validate ongoing transactions. The algorithm hashes data, verifies transactions’ legitimacy, and adds a new record to the chain.

Those users who participate in verification processes are called forgers, and their reward system is different from PoW miners. Forgers’ profit consists of transaction fees. Generally, the more coins you hold and the longer you stake them, the higher your profit will be.

Unlike highly exclusive and commercial Bitcoin mining, staking is available for anyone. Straightforward in its core, staking doesn’t ask for expensive equipment or constant process monitoring. You only need to purchase the necessary amount of currency to start. Alternatively, you can also join the pool.

DPoS algorithm suggests that every coin holder can participate in choosing delegates, a trusted party to create the next block. Apart from block creation, delegates are responsible for establishing network rules, network maintenance, and overall stability. To avoid abusing power, delegates stay in charge only for a certain time period, and pretty much anyone can apply.

The DPoS model features another type of staking participants, aka witnesses. They act as nodes and monitor transactions. Held in real-time, the voting procedure (for both delegates and witnesses) is based on reputation to lower the risks of forgery. The chosen witnesses are responsible for block generation and transaction verification, but cannot take part in network rules creation.

HitBTC is ready to provide the easiest way of the staking process and earn profitable rewards for users.

Staking is way more accessible than mining and can become an additional source of income for those crypto enthusiasts who want to go beyond holding. Anyone can participate in staking, and there are quite a few platforms that allow doing so effortlessly.

The HitBTC crypto wallet is a free and simple solution for beginners.

App on Android and iOS.

HitBTC Mobile AppDon’t forget that you can trade on our platform from your mobile device. Start today by downloading the HitBTC App on Android and iOS.

This article came directly from HitBTC, at https://blog.hitbtc.com/all-you-need-to-know-about-crypto-staking/

Previous article
All You Need to Know About Web 3.0 and Crypto Investing
Next article
Explore web3 confidently with Coinbase Wallet and Ledger | by Coinbase | Feb, 2022