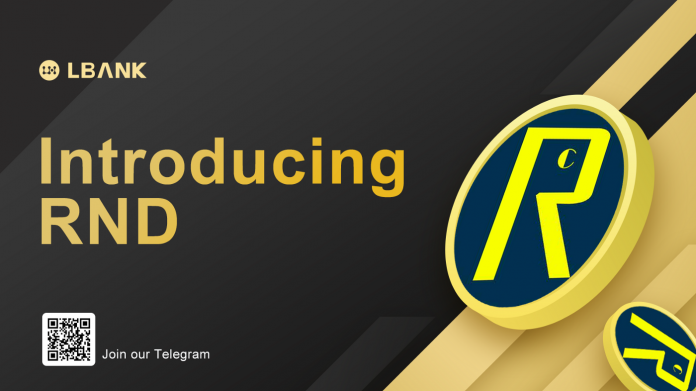 Meme coins have been trending for a while now in the crypto space and most of them are animal related. Dogs, in particular, are the most popular meme element used in global meme coin community. From Dogecoin to Shiba Inu (SHIB), the success of numerous meme coins has been witnessed by the vast majority of crypto investors and enthusiasts.

And now, this everlasting trend of using animal as the major meme coin element might just come to an end, with the inception of a new meme created by a prodigy. Recently, random (RND), a 12-year-old primary school student’s new project, once again set off a “meme boom” and caused a sensation in the crypto community. After receiving widespread attention, it’s now listed on LBank Exchange to provide opportunities for more people who are interested in investing RND.

Meme and the Prodigy

On February 6, an extensive discussion occurred in the crypto space, all because a 12-year-old child released a video tutorial of smart contract on bilibili, a popular Chinese video website. According to the video he sent, his name is Huang Zheng and he is still a primary school student.

Huang Zheng said that he deployed a smart contract on the Ethereum network at the end of January. The tutorial is based on the whole process of him deploying the smart contract, which introduced the creation, deployment, testing, release and subsequent contents of the smart contract in detail. He hopes the video will help people learn how to create a smart contract by themselves from scratch. This video has already been deleted.

Although Huang Zheng has repeatedly stressed that he is only a primary school student and hopes to learn and progress with everyone, his potential cannot be underestimated.

Huang Zheng began to learn programming six years ago and came into contact with the Solidity language in the second half of 2021. Out of interest in Solidity, Huang Zheng created RND token on the Ethereum network through self-study and deployed a smart contract. RND has no private sale and is directly airdropped to 101010 users. Such a huge airdrop event quickly attracted people to join one after another and RND suddenly became a popular project in the crypto community. Some people even began to expect Huang Zheng to become the next Vitalik, the founder of Ethereum.

The full name of RND project is TheRandomDao. Its official website page is very concise, with only a few words of project introduction. According to the information on the official website, a total of 37.8 trillion RND tokens were issued, of which 12% were left to Huang Zheng’s parents to thank them for their dedication and love over the past 12 years. In addition, 38% will be provided for liquidity mining, and the remaining 50% will be airdropped to 101010 people. At present, the airdrop has already been completed, which shall be claimed within one year, and the unclaimed tokens after one year will be destroyed directly.

It is worth mentioning that the RND token is only used as a demonstration in the tutorial video of Solidity programming and has no other value. Based on this, many people believe that RND also belongs to the meme coin family. Meme culture no longer needs to use animals as their main element but has a new identity that is created regardless of profits and is more “random”, as its name indicates.

Will RND be the Next SHIB?

There is no doubt that the RND token issued by Huang Zheng has a meme element in it. Although meme coins are popular at present, they have also been widely criticized. Their prices are usually pushed up by giant whales or countless retail investors. Since the prices have no practical support, when there is no profit, they will naturally collapse.

When it comes to meme coins, investors always feel kind of suspicious about their hype. SHIB has successful transformed itself to a beloved project after being hyped by the community. Will RND token, as a hot meme project, become the next SHIB?

Huang Zheng himself tweeted that RND has no practical value and is only used for demonstration in the tutorial video of Solidity programming and called on not to overhype the RND token value.

As soon as this tweet was sent, two voices immediately appeared in the community. Some people said that RND itself is a DAO. There is no private sale, no public offering, no various ICOs or IEOs. Instead, it allows everyone to get a free airdrop. Overall, this is the real DAO, something that a group of people think is valuable. There were also some other voices claming that Huang Zheng has no control over what the community would do in the future, and the community is going to make RND the next SHIB.

According to the current situation, RND is still popular in the community and has attracted the participation of many crypto influencers. Due to the open-source contract of TheRandomDao, RND may also derive various project branches under the condition of community autonomy. The development of TheRandomDao may even end up running counter to what Huang Zheng hopes.

However, it is not an easy task to recreate SHIB’s success. In the end, RND may not be the next SHIB, but another special existence in meme culture. Listed on March 11, 2022, RND is now available for trading on LBank Exchange. Any investor who has interest in RND investment can easily buy and sell RND on LBank Exchange right now.

LBank Exchange, founded in 2015, is an innovative global trading platform for various crypto assets. LBank Exchange provides its users with safe crypto trading, specialized financial derivatives, and professional asset management services. It has become one of the most popular and trusted crypto trading platforms with over 6.4 million users from now more than 210 regions around the world.

This article came directly from the LBank blog, found on https://lbank-exchange.medium.com/12-year-old-prodigy-created-project-the-randomdao-listed-on-lbank-520270ecdf57?source=rss-87c24ae35186——2